John Heyman is a British film and TV producer also involved in television production consulting and film financing. Married to his wife Nizza since 1982 this is his second marriage.
Read full biography

He had one child, David (60, English film producer) . When his first child, David Heyman, was born, John Heyman was 28 years old.

There are 10 movies of John Heyman:

He graduated from St Edmund Hall

Other facts about John Heyman 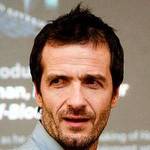 John Heyman Is A Member Of