Mahmud Mahmud was an Iranian politician and historian. He served as Governor of Tehran Member of Parliament and Minister of Post and Telegraph. He also was active academically. He wrote many articles and books and translated Machiavelli's Principe into Persian. His most extensive work was a volume series titled The Political Relations of Iran and Britain in the 19th Century. He died a blind man at the age of 84 in Tehran.
Read full biography

Other facts about Mahmud Mahmud

Mahmud Mahmud Is A Member Of 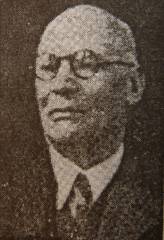