Emil Newman was an American composer and conductor who worked on more than 200 films and TV shows. He was nominated for an Oscar for his musical direction on the classic Sun Valley Serenade. A native of Connecticut Newman entered films in 1940 as the musical director on 13 films. He was credited on 25 films in 1941 and 28 in 1942 one of which Whispering Ghosts contained his first contribution as a composer.
Read full biography

There are 17 movies of Emil Newman.

The Mad Magician (1954) As Original Music Composer, he was 43 years old

Rancho Notorious (1952) As Original Music Composer, he was 41 years old

Other facts about Emil Newman 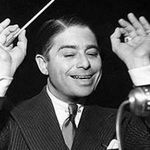 Emil Newman Is A Member Of