Tamara Boroš is a female table tennis player competing for Croatia. She has been one of the relatively rare European players who competes at the highest level of the sport together with the players from Far East. Boroš was born in Senta SAP Vojvodina SR Serbia SFR Yugoslavia. As a junior she played for the local table tennis club STK Senta before she moved to Croatia in 1993. Tamara Boroš was the World's number 2 player in 2002.
Read full biography

When is Boroš's next birthday?

Other facts about Tamara Boroš

Tamara Boroš Is A Member Of 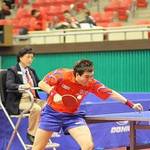