She is living in Szczecin. 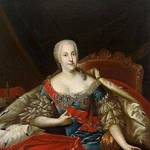 Frederick August I Duke of Oldenburg, 73

SOPHI Is A Member Of

When is SOPHI's next birthday?