Saud bin Nayef is the former head of the Crown Prince Court and special advisor to the Saudi Crown Prince. He is governor of Eastern Province Saudi Arabia as well as a member of House of Saud. Prince Saud is regarded as one of the candidates for king or crown prince when succession passes to the new generation. read more 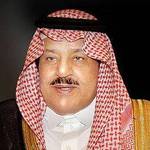 He graduated from University Of Portland

Saud bin Nayef Is A Member Of