Kevin Goetz is a Director. 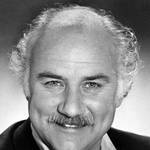 His mother is Constance Fleurat and his father is Peter Michael Goetz. His father is a Actor.