He is most well known for creating and starring in the film Sweet Sweetback's Baadasssss Song. He is the father of actor and director Mario Van Peebles.

Born Melvin Peebles, in Chicago, Illinois, his father was a tailor. In 1954, Melvin graduated with a B.A. in literature from Ohio Wesleyan University and, thirteen days later, joined the Air Force, serving for three and a half years.

He worked as a cable car gripman in San Francisco. Later, he wrote about these experiences. His first book, The Big Heart, credited to Melvin Van, evolved from a small article and a series of photographs taken by Ruth Bernhard.

According to Van Peebles, a passenger suggested that he should become a filmmaker. Van Peebles shot his first short film, Pickup Men for Herrick in 1957, and made two more short films during the same period. About these films, Van Peebles says: "I thought they were features. Each one turned out to be eleven minutes long. I was trying to do features. I knew nothing." As he learned more about the filmmaking process, he found out that "I could make a feature for five hundred dollars. That was the cost of 90 minutes of film. I didn't know a thing about shooting a film sixteen to one or ten to one or none of that shit. Then I forgot you had to develop film. And I didn't know you needed a work print. All I can say is that after I did one thing he would say, 'Well, aren't you gonna put sound on it?' and I would go, 'Oh shit!' That's all I could say."

After Van Peebles completed his first short films, he took them with him to Hollywood to try to find work, but was unable to find anyone who wanted to hire him as a director. Van Peebles decided to move his family to the Netherlands where he planned to study Astronomy. On the way to Europe, in New York City, he met Amos Vogel, founder of the avant-garde Cinema 16 who agreed to place two of Van Peebles's shorts in his rental catalog. Vogel screened Van Peebles's Three Pickup Men for Herrick at Cinema 16 on a program with City of Jazz in the spring of 1960 with Ralph Ellison leading a post-film discussion. When Vogel went to Paris shortly after, he brought Van Peebles's films to show Henri Langlois and Mary Meerson at the Cinémathèque Française. Meanwhile, in the Netherlands, Van Peebles's marriage dissolved and his wife and children went back to America. Shortly after, Van Peebles was invited to Paris probably by Mary Meerson and/or Lotte Eisner, founders of the Cinémathèque Française, on the strength of his short films. In France, Van Peebles created a short film Les Cinq Cent Balles (500 Francs) (1961) and then established himself as a French writer. He did investigative reporting for France Observateur during 1963-64 during which he profiled, and later became friends with, Chester Himes. Chester Himes got him a job at the anti-authoritarian humor magazine Hara-kiri where Van Peebles wrote a monthly column and eventually joined the editorial board. During 1965–66, Mad magazine attempted a French edition and hired Van Peebles as the Editor and Chief during its short-lived five-issue run. He began to write plays in French, utilizing the sprechgesang form of songwriting, where the lyrics were spoken over the music. This style carried over to Van Peebles' debut album, Brer Soul.

Van Peebles was a prolific writer in France. He published four novels and a collection of short stories. He completed at least one play, La Fête à Harlem which was also released as a novel, and which he would later make into the musical Don't Play Us Cheap. Roger Blin directed La Fête a Harlem with the Les Griots theatrical troop for the Festival du jeune théâtre in Leige, Belgium in September 1964. Van Peebles made his first feature-length film, The Story of a Three-Day Pass (La Permission) (1968) based on a novel by the same title. The film caught the attention of Hollywood producers who mistook him for a French auteur after it won an award at the San Francisco International Film Festival as the French entry. Van Peebles's first Hollywood film was the 1970 Columbia Pictures comedy Watermelon Man, written by Herman Raucher. The movie tells the story of a casually racist white man who suddenly wakes up black and finds himself alienated from his friends, family and job. In 1970 Van Peebles was also to direct filming of the Powder Ridge Rock Festival, which was banned by court injunction.

After Watermelon Man, Van Peebles became determined to have complete control over his next production, which became the groundbreaking Sweet Sweetback's Baadasssss Song (1971), privately funded with his own money, and in part by a $50,000 loan from Bill Cosby. Van Peebles not only directed, scripted, and edited the film, but wrote the score and directed the marketing campaign. The film, which in the end grossed $10 million, was, among many others, acclaimed by the Black Panthers for its political resonance with the black struggle. His son Mario's 2003 film BAADASSSSS! tells the story behind the making of Sweet Sweetback's Baadasssss Song; father and son presented the film together as the Closing Night selection for Maryland Film Festival 2004.

In the 1980s, Van Peebles became an options trader on the American Stock Exchange while continuing to work in theater and film.

In 2005, it was announced that Van Peebles would collaborate with Madlib for a proposed double album titled Brer Soul Meets Quasimoto. However, nothing has been said about this project since it was announced.

In 2008, Van Peebles completed the film Confessionsofa Ex-Doofus-ItchyFooted Mutha, which was the Closing Night selection for Maryland Film Festival 2008, and appeared on All My Children as Melvin Woods, the father of Samuel Woods, a character portrayed by his son, Mario.

In 2009, Van Peebles became involved with a project to adapt Sweet Sweetback into a musical. A preliminary version of this was staged at the Apollo on April 25–26, 2009. As well, he wrote and performed in a stage musical, Unmitigated Truth: Life, a Lavatory, Loves, and Ladies, which featured some of his previous songs as well as some new material.

Van Peebles in front of his artwork, A Ghetto Mother's Prayer, in 2017

On August 21, 2012, he distributed a new album, on vinyl only, called Nahh... Nahh Mofo. This album was distributed at his birthday celebration at Film Forum. On November 10, 2012, he released a video for the song Lilly Done the Zampoughi Every Time I Pulled Her Coattail to go with the album, which was announced on his Facebook page.

On May 5, 2013, he returned to the Film Forum for a screening of Charlie Chaplin's The Kid (1921) and was a judge at the Charlie Chaplin Dress-Alike Contest that was after the screening. He wore a bowler hat and baggy pants in honor of Chaplin.

In September 2013, Van Peebles made his public debut as a visual artist, as a part of a gallery featured called "eMerge 2.0: Melvin Van Peebles & Artists on the Cusp". It features "Ex-Voto Monochrome (A Ghetto Mother's Prayer)", one of many pieces of art he created to be on display in his home.

In 2017, Methane Momma, a short film directed by Alain Rimbert, featured Van Peebles and his narration of poetic work with accompaniment of music by The Heliocentrics.

In 2019, Burnt Sugar presented the film Sweetback in Brooklyn while playing their own interpretation of the soundtrack. Van Peebles appeared at the presentation.

Melvin Van Peebles married Maria Marx. They lived in Mexico for a period in the late 1950s, where he painted portraits. Their son, actor and director Mario Van Peebles, was born while they resided in Mexico. The family subsequently returned to the United States.

Description above from the Wikipedia article Melvin Van Peebles, licensed under CC-BY-SA, full list of contributors on Wikipedia. 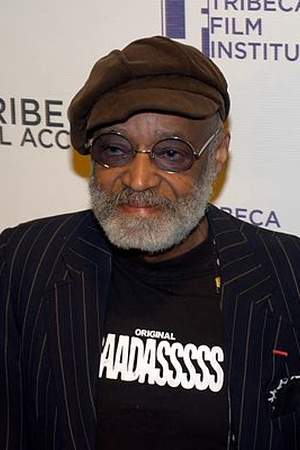