Kathryn Lee Gifford (née Epstein; born August 16, 1953) is a French-born American television presenter, singer, songwriter, occasional actress and author. She is best known for her 15-year run (1985–2000) on the talk show Live! with Regis and Kathie Lee, which she co-hosted with Regis Philbin. She is also known for her 11-year run with Hoda Kotb, on the fourth hour of NBC's Today show (2008–2019). She has received 11 Daytime Emmy nominations and won her first Daytime Emmy in 2010 as part of the Today team. Gifford's first television role had been as Tom Kennedy's singer/sidekick on the syndicated version of Name That Tune only in the 1977–1978 season. She also occasionally appeared on the first three hours of Today and was a contributing NBC News correspondent. Kathie Lee married Paul Johnson, a composer/arranger/producer/publisher of Christian music, in 1976. After their divorce in 1982, she married sportscaster and former NFL player Frank Gifford in 1986. He died in 2015. Kathie Lee has released studio music albums and several books.

Gifford was born Kathryn Lee Epstein in Paris, France, to American parents, Joan (born Cuttell; January 20, 1930 – September 12, 2017), a singer, and Aaron Epstein (March 19, 1924:– November 19, 2002), a musician and former US Navy Chief Petty Officer. Aaron Epstein was stationed with his family in France at the time of Gifford's birth. Gifford grew up in Bowie, Maryland, and attended Bowie High School.

Gifford's paternal grandfather was a Russian Jew from Saint Petersburg and her paternal grandmother had Native American ancestry. Her mother, a relative of writer Rudyard Kipling, was of French Canadian, German and English descent.

After seeing the Billy Graham–produced film The Restless Ones at age 12, Gifford became a born-again Christian. She told interviewer Larry King, "I was raised with many Jewish traditions and raised to be very grateful for my Jewish heritage."

During high school, Gifford was a singer in a folk group, "Pennsylvania Next Right", which performed frequently at school assemblies. After high school graduation in 1971, Gifford attended Oral Roberts University in Tulsa, Oklahoma, studying drama and music. During a summer in the early 1970's, she was a live-in secretary/babysitter for Anita Bryant at her home in Miami. Her first regular appearances on national TV was as a singer on the game show "Name That Tune," hosted by Tom Kennedy in the late 1970s, in which she would sing small portions of songs that contestants would have to identify.

Live! with Regis and Kathie Lee

On June 24, 1985, Gifford replaced Ann Abernathy as co-host of The Morning Show on WABC-TV with Regis Philbin. The program went into national broadcast in 1988 as Live! with Regis and Kathie Lee, and Gifford became well known across the country. Throughout the 1990's, morning-TV viewers watched her descriptions of life at home with her sportscaster husband Frank, son Cody, and daughter Cassidy. Gifford left the show on July 28, 2000.

Philbin and Gifford were jointly nominated eight consecutive years in a row (1993 to 2000) for Outstanding Talk Show Host during the Daytime Emmy Awards.

Today with Kathie Lee and Hoda

On March 31, 2008, NBC announced that Gifford was to join its morning show, Today, as co-host of the fourth hour titled Today with Kathie Lee and Hoda, alongside Hoda Kotb. This marked her return to morning television; in many markets, she aired directly after her old show, currently called Live with Kelly and Ryan. Because the fourth hour of Today airs live at 10:00:am ET, and Live with Kelly and Ryan airs live at 9:00:am ET, Gifford's hour did not compete directly with her former show in most markets. Kotb and Gifford replaced Ann Curry and Natalie Morales. In the weeks prior to Gifford's arrival, ratings indicated 1.9 million viewers of the fourth hour of Today. As of 2014, the fourth hour of Today with Gifford and Kotb has averaged 2.15 million total viewers, an increase of 13 percent over the 2008 ratings. On December 11, 2018, it was announced that she would be leaving Today in April 2019. Her final Today Show appearance was on April 5, 2019 with a party, including a video by her children Cody and Cassidy Gifford. In 2019, they won the Daytime Emmy Award for Outstanding Informative Talk Show Host.

Other media appearances and projects

Gifford's career took off in the 1970s as a vocalist on the game show Name That Tune with Tom Kennedy. In 1978, she joined the cast of the short-lived Hee Haw spinoff, Hee Haw Honeys.

Gifford has made guest appearances in films and television series, and has several independently released albums on CD, including 2000's The Heart of a Woman, featuring the single "Love Never Fails".

She appeared as a spokesperson for Slim Fast diet shakes after her son Cody was born. She also was the face of Carnival Cruise Lines in the late 1980s and early 1990s, singing "If my friends could see me now!" In 1991 she christened the Carnival Ecstasy, the 2nd of the Fantasy Class of cruise ships. In 1994, she appeared as herself in an episode of the NBC sitcom Seinfeld.

She did a number of voice overs most notably as Echidna in the 1998 TV series Hercules and in Higglytown Heroes as the Mail Carrier Hero in 2004.

In September 2005 she became a special correspondent on The Insider, a syndicated entertainment magazine television show, ending her relationship with that program upon her co-hosting role with Today.

She played the role of Miss Hannigan in a concert performance of Annie at Madison Square Garden in December 2006.

On an episode that aired March 27, 2010, she guest starred on The Suite Life on Deck, along with her real-life daughter, Cassidy.

She appeared as herself in the 2015 television film Sharknado 3: Oh Hell No!.

She has written two autobiographical books, Just When I Thought I'd Dropped my Last Egg: Life and Other Calamities in 2010 and The Rock, the Road and the Rabbi in March 2018. She has also written a number of children's books.

Gifford left Today in order to pursue a movie career as an actress, director, and producer. In 2018, she filmed Then Came You in which she co-stars with Craig Ferguson. That same year, she also filmed a Hallmark Christmas movie for Hallmark Movies & Mysteries called A Godwink Christmas. Gifford intends to make movies about the experiences of losing a loved one and being a widow, which she considers an underrepresented topic in Hollywood. Gifford has several projects in the works including sequels to Then Came You.

On April 28, 2021, Gifford was honored with a star on the Hollywood Walk of Fame for her contributions to the television industry. Her star is located at 6834 Hollywood Boulevard, only five stars away from that of her former co-host Regis Philbin.

In the late 1990s, Gifford began working in musical theatre. She contributed a number of musical numbers to Hats, and wrote and produced Under The Bridge, based upon the children's book The Family Under The Bridge by Natalie Savage Carlson. In 2000 she released the album The Heart of a Woman on Universal.

In 2007, she premiered Saving Aimee, a stage musical about evangelist Aimee McPherson, at the Signature Theatre in Arlington, Virginia. The premiere starred actress Carolee Carmello in the lead role. The show, now titled Scandalous: The Life and Trials of Aimee Semple McPherson, ran on Broadway from November 15, 2012, through December 9, 2012, with Carmello reprising her role as McPherson. On April 30, 2013, Carmello received her third Tony Award nomination for the performance.

On April 16, 2007, Gifford was a guest presenter at the Washington, D.C. Helen Hayes Award Ceremony, honoring contributions and professional accomplishments in theatre.

Gifford is currently working on a musical adaptation of It's a Wonderful Life with John McDaniel; McDaniel is composing music while Gifford is writing lyrics.

Gifford is a celebrity ambassador for the non-profit organization Childhelp. She regularly makes appearances at fund raisers and events for the child abuse prevention and treatment organization and is an ardent supporter.

Frank and Kathie Lee Gifford raised the money to build and continued to financially support two shelters in New York City for babies born with HIV, or a congenital crack cocaine addiction. These shelters were named in honor of her children, Cody and Cassidy.

In 1996 the National Labor Committee, a human rights group, reported that sweatshop labor was being used to make clothes for the Kathie Lee line, sold at Wal-Mart. The group reported that a worker in Honduras smuggled a piece of clothing out of the factory, which had a Kathie Lee label on it. One of the workers, Wendy Diaz, came to the United States to testify about the conditions under which she worked. She commented, "I wish I could talk to . If she's good, she will help us."

Labor activist Charles Kernaghan spoke to the media and accused Gifford of being responsible for the sweatshop management activity. Gifford addressed Kernaghan's allegations on the air during Live! with Regis and Kathie Lee, explaining that she was not involved with hands-on project management in factories.

Gifford later contacted federal authorities to investigate the issue and worked with US federal legislative and executive branch agencies to support and enact laws to protect children against sweatshop conditions. She appeared with President Bill Clinton at the White House in support of the government's initiatives to counter international sweatshop abuses.

Kathie Lee and Frank Gifford in 1996

Kathie Lee married Paul Johnson a composer/arranger/producer/publisher, in 1976. They gained fame in Christian music, appearing on covers of Christian magazines. But the marriage was strenuous from the start and in 1981, Johnson moved out. The couple divorced in 1982.

On October 18, 1986, Kathie Lee married a second time, this time to Frank Gifford, an American football player and television sports commentator. It was his third marriage after marriages with Maxine Avis Ewart and Astrid Lindley. With Ewart he had three children.

Kathie Lee was 23 years younger than Frank. They had two children together, Cody Newton Gifford (born March 22, 1990) and Cassidy Erin Gifford (born August 2, 1993). They also shared a birthday: August 16. Frank died on August 9, 2015, from natural causes at their Greenwich, Connecticut, home at the age of 84. In 2017, she released "He Saw Jesus", a very personal song Kathie Lee co-wrote (with songwriter Brett James) and dedicated to her husband. All proceeds from the song went to the international evangelical Christian humanitarian aid charity Samaritan's Purse.

(as Kathie Lee Gifford except where indicated)

Description above from the Wikipedia article Kathie Lee Gifford, licensed under CC-BY-SA, full list of contributors on Wikipedia. 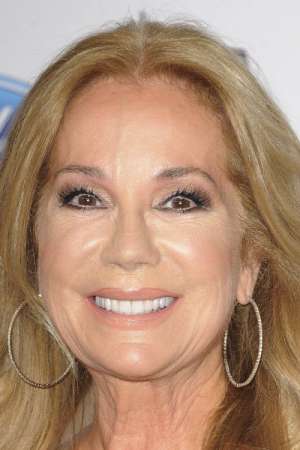