Saunders was born in Cleveland, Ohio. He was an All-state basketball player at Cuyahoga Heights High School in suburban Cleveland. In his senior season, 1973, he was named Ohio's Class A High School Basketball Player of the Year, leading the state in scoring average with 32.0 points per game. At the University of Minnesota, he started 101 of his 103 career contests and as a senior, teamed with Ray Williams, Mychal Thompson, Kevin McHale, and Osborne Lockhart.

Saunders began his coaching career at Golden Valley Lutheran College where he compiled a 92–13 record, including a perfect 56–0 mark at home, in four seasons. In 1981, he became an assistant coach at his alma mater, Minnesota, and helped guide the Golden Gophers to the Big Ten championship that season. After five seasons at Minnesota, he became an assistant coach at the University of Tulsa where he worked for two seasons before heading to the pro ranks.

Saunders became the coach of the Rapid City Thrillers of the Continental Basketball Association (CBA) in the 1988–89 season, where future Kings and Warriors head coach Eric Musselman served as the team's general manager. Musselman's father, Bill Musselman, had recruited Flip when Bill was head coach at the University of Minnesota.

Saunders would leave after seven productive seasons as a head coach in the CBA, where he ranks second with 253 career victories.

Saunders joined the Minnesota Timberwolves of the National Basketball Association (NBA) on May 11, 1995 as general manager, working under his former Minnesota teammate, Kevin McHale. On December 18, 1995, Saunders was named head coach of the Timberwolves, replacing Bill Blair.

This happened shortly after McHale had taken over the basketball operations for the Timberwolves. He then added the coaching duties to his GM responsibilities after the team had gotten off to a 6–14 start. The Timberwolves went 20–42 the rest of the year, but the emergence of young Kevin Garnett as a front-line NBA player was a huge plus over the second half of the season.

After the Timberwolves' success in the 2003–04 NBA season, in which they won their first (and to date, only) division title and advanced to the Western Conference Finals, they struggled in the 2004–05 season. On February 12, 2005, McHale fired Saunders and named himself head coach for the rest of the season. McHale was unable to right the ship, and the Wolves finished one game out of the playoffs, the first time they had missed the playoffs in nine years. Many fans believed that Saunders' firing was unwarranted, citing instead the contract troubles of Sam Cassell and Latrell Sprewell as the reasons for the team's failure. However, many also acknowledged that Saunders had coached ten years in Minnesota, and perhaps a new voice was needed.

Saunders replaced Larry Brown as coach of the Detroit Pistons on July 21, 2005. Under Saunders, the team set a new franchise record for wins during the regular season, finishing with a 64–18 record. Saunders coached the Eastern Conference All-Stars in the 2006 NBA All-Star Game in Houston, Texas.

Saunders was fired June 3, 2008 after the Pistons lost to the Boston Celtics in the 2008 Eastern Conference Finals. Pistons president of basketball operations Joe Dumars said the team needed a "new voice". According to a post-mortem by ESPN's Chris Sheridan, Saunders never really earned the respect of the Pistons locker room, and was unable to get them to raise their game at crucial moments.

On April 14, 2009, Saunders reached an agreement to become the new coach of the Washington Wizards. The deal was reportedly worth $18 million over 4 years.

On January 24, 2012, Saunders was fired as the coach of the Wizards. Replaced by former Minnesota Timberwolves head coach Randy Wittman, Saunders departed the Wizards with a record of 51–130.

On June 6, 2014, Saunders was named the head coach of the Minnesota Timberwolves, returning to the franchise for a second stint. During his second stint with the Timberwolves, Saunders was diagnosed with Hodgkin's lymphoma. During his recovery, he delegated his coaching position to assistant coach and former NBA Coach of the Year winner Sam Mitchell. His 427 wins during parts of ten seasons in two stints are the most in franchise history and, until the 2017–18 season, he was the only coach to lead the Timberwolves to a winning season or coach a playoff game.

Career as an executive

On April 29, 2012, Saunders joined the Boston Celtics as an advisor.

On May 3, 2013, Saunders was named the Timberwolves' President of Basketball Operations. On June 5, 2014, Saunders was named head coach as well. During his recovery from Hodgkin's Lymphoma, he delegated his duties within the front office to the team's general manager Milt Newton.

On August 11, 2015, Saunders announced he had been diagnosed with Hodgkin's lymphoma, for which he was undergoing treatment. Saunders planned to remain the Timberwolves' head coach and president. However, after Saunders was hospitalized for more than a month following complications in September, team owner Glen Taylor announced that Saunders would miss the next season. Saunders died on October 25, 2015 at the age of 60. On February 15, 2018, the Timberwolves held a "Flip Saunders Night" during which a permanent banner was unveiled in the Target Center honoring Saunders. A little over three years after his death, Flip's son Ryan Saunders took over as the Timberwolves' head coach following the firing of Tom Thibodeau.

Description above from the Wikipedia article Flip Saunders, licensed under CC-BY-SA, full list of contributors on Wikipedia. 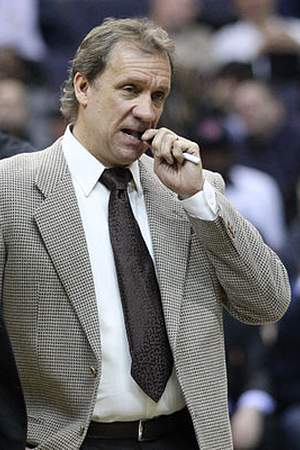