Spanish footballerIn this Spanish name, the first or paternal surname is Arbeloa and the second or maternal family name is Coca.*Club domestic league appearances and goals, correct as of 04:32, 4 December 2016 (UTC)

Álvaro Arbeloa Coca (Spanish pronunciation::; born 17 January 1983) is a Spanish retired footballer. He predominantly played as a right back, although he also occasionally played on the left side.

He started his professional career with Real Madrid, playing mostly with the reserves. In 2006 he moved to Deportivo, joining Liverpool after half a season and going on to appear in 98 official matches over three Premier League seasons. In 2009, he returned to Real Madrid for a fee of £5 million, spending seven years there and winning eight major *les, including the 2011–12 edition of La Liga and two Champions League *les.

Arbeloa earned 56 caps for Spain, representing the country at the 2010 World Cup, Euro 2008 and Euro 2012 and winning all three tournaments.

Arbeloa was born in Salamanca, Castile and León, relocating with his family to Zaragoza at the age of four. He started playing football at local Real Zaragoza, joining Real Madrid's youth system at the age of 18.

Arbeloa spent three full seasons with Real Madrid Castilla, the reserve team, two of those spent in Segunda División B. In 2004–05, he contributed 32 games and one goal – playoffs included – as they returned to Segunda División after a 14-year absence. On 16 October 2004, he made his La Liga debut with the main squad, coming on as a second-half subs*ute in a 1–1 away draw against Real Betis.

On 24 July 2006, Arbeloa signed for Deportivo de La Coruña, with Real Madrid being en*led to 50% of any transfer occurring in the following three years. He said of his departure: "This is a strange situation for me; I have been playing for Real Madrid for five years, since I was 16", adding "Real always has the best players. There were eight defenders in the squad, something had to give in."

Over a six-month spell with the team from Galicia, Arbeloa featured in 21 official games, 18 of his league appearances being complete.

Arbeloa playing for Liverpool in 2007

Arbeloa signed for English club Liverpool on 31 January 2007, managed by countryman Rafael Benítez. He made his Premier League debut on 10 February, replacing Jermaine Pennant for the final 15 minutes of the 2–1 away loss to Newcastle United.

Arbeloa made his first start for the Reds against FC Barcelona, in the 2006–07 edition of the UEFA Champions League. He featured as a left-back at the Camp Nou, as his stronger right foot could stop Lionel Messi who had a tendency to cut his runs towards the center of the field; his team won 2–1 and eventually 2–2 on aggregate, with the player also featuring the full 90 minutes at Anfield.

Arbeloa scored his first goal for Liverpool against Reading, on 7 April 2007. He replaced Steve Finnan in the last minutes of the Champions League final, a 2–1 defeat to A.C. Milan.

Arbeloa's squad number changed from 2 to 17 for 2007–08, due to personal preference. He cemented a first-team place in that campaign, making 41 compe*ive appearances in a fourth-place finish.

On 17 May 2009, in a match against West Bromwich Albion, Arbeloa was involved in an on-field clash with teammate Jamie Carragher – the two had to be separated by Daniel Agger, Xabi Alonso, Emiliano Insúa and Pepe Reina. Carragher later explained that he clashed with Arbeloa as a moment of poor defending from the latter threatened the clean sheet, further explaining "we want to keep a clean sheet and we want Pepe to have a chance of the Golden Glove for the fourth season running"; Benítez refused to comment about the incident.

Arbeloa playing for Real Madrid in 2012

On 29 July 2009, it was announced that Real Madrid and Liverpool had reached an agreement on the transfer of Arbeloa, for a fee of £5 million and a five-year contract. After the departure of Míchel Salgado and Miguel Torres, he was handed the number 2 jersey.

Arbeloa spent the vast majority of his first season in his second stint as a left-back, netting his first goal on 13 February 2010 in a 3–0 away win over Xerez CD. His second came in the Madrid Derby on 28 March, scoring with his right foot past David de Gea in the 3–2 defeat of Atlético Madrid. Under new manager José Mourinho, he celebrated his tenth appearance in the Champions League with his first goal in the compe*ion, netting from outside the penalty area in a 4–0 victory at AFC Ajax in the group stage.

In the 2011–12 campaign, due to Ricardo Carvalho's lengthy injury, Sergio Ramos was relocated to centre-back and Arbeloa began appearing almost exclusively on the right side of the back four. On 1 August 2012, he extended his link to the club until June 2016.

Subsequently, Arbeloa became a fringe player. In 2015–16 he appeared in just nine matches in all compe*ions, two of those being in the Champions League which was won for the second time in three years; on 8 May 2016, he confirmed he would leave on 30 June.

On 31 August 2016, Arbeloa returned to the Premier League for the first time in seven years, signing for West Ham United for one season. He made his debut on 21 September, playing the full 90 minutes in a 1–0 home win against Accrington Stanley in the EFL Cup.

Arbeloa was released at the end of the campaign after having made just four compe*ive appearances, three in the league. He retired in June 2017 at the age of 34, after a professional career that spanned 15 years.

Arbeloa on the ball during the Euro 2012 final

On 1 February 2008, Arbeloa was called up to the Spanish national team for the first time, for a friendly with France in Málaga, but he was forced to pull out because of injury. He made his debut on 26 March against Italy, and was picked for UEFA Euro 2008's final stages, appearing in the first-round match against Greece (2–1 win) as the nation emerged victorious.

Arbeloa's versatility saw him being called up for the 2009 FIFA Confederations Cup and the 2010 FIFA World Cup, again as Ramos backup. His contribution in the latter tournament, which also ended in victory, consisted of 14 minutes in the 2–0 victory over Honduras in the group phase.

Vicente del Bosque selected Arbeloa for the following tournament, Euro 2012. Due to Carles Puyol's absence, however, he was now part of the starting XI alongside Ramos, Gerard Piqué and Jordi Alba, with Spain only conceding once in six fixtures and winning the tournament.

Description above from the Wikipedia article Álvaro Arbeloa, licensed under CC-BY-SA, full list of contributors on Wikipedia. 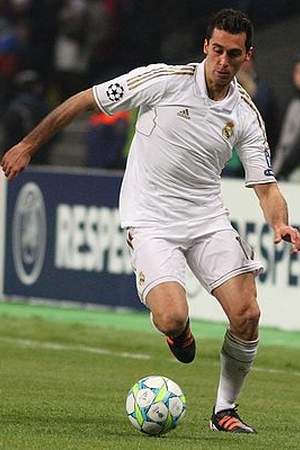