Zacharie Noah is a Cameroonian former professional footballer who won the Coupe de France in 1961 with UA Sedan-Torcy. Noah who played as a defender had previously played for Stade Saint-Germain. He is the father of French tennis player Yannick Noah and the grandfather of basketball player Joakim Noah.
Read full biography

How tall was Zacharie Noah?

Other facts about Zacharie Noah 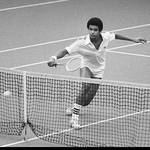 Zacharie Noah Is A Member Of