Yehuda Pen, also known as Yuri Pen (Yiddish: יודל פּען – Yudl Pen; 5 June 1854 – 1 March 1937), was a Russian and Soviet Jewish painter and art teacher. He was a major figure of the Jewish Renaissance in Russian and Belarusian art at the beginning of 20th century. Pen's most famous student in Vitebsk was the great Jewish painter Marc Chagall.

Yehuda Pen was born on May 24 (June 5 Old Style) 1854 in the city of Novoalexandrovsk, known as Ezhereni in Yiddish. He was orphaned at the age of thirteen and became an apprentice to a decorative painter in Dvinsk. In 1879 he went to Saint Petersburg and took the entrance exam at the Imperial Academy of Fine Arts, but failed due to his lack of fluency in Russian. Despite lacking the necessary internal p*port, he remained there and, in 1881, obtained permission to audit cl*es. His teachers included Pavel Chistyakov, Valentin Serov and Mikhail Vrubel. He was eventually admitted as a student and graduated in 1886.

He returned to Dvinsk for a time, then moved to Riga, where he became involved in the local artistic circles and met Ilya Repin, who had an estate along the Dvina that was a meeting place for the Peredvizhniki. In 1891, on his friends' advice, he settled in Vitebsk and, a year later, opened a private art school that was the first Jewish art school in Belarus. He catered to many poor students who were unable to gain admission to the larger academies; all they needed was a sponsor. Pen's pupils included Ilya Mazel, Yefim Minin, Oskar Meshchaninov, Marc Chagall, Ossip Zadkine, Peter Yavich, Leon Gaspard, El Lissitzky, and Isaac Lichtenstein. The school was in operation until 1919. At that time, thanks to the efforts of Chagall, he became a teacher at the Vitebsk Art School.

Pen was killed at his home in Vitebsk on the night of 28 February/1 March 1937. The exact cir*stances of his death have never been clarified. He was buried in the Jewish cemetery there. The bronze bust on his grave has been stolen twice.

The vast majority of Pen's major works are located in Belarusian museums, a gallery devoted to his works has been created in Vitebsk. His works are also kept at the Vitebsk Museum of Modern Art and the Belarusian National Arts Museum.

Description above from the Wikipedia article Yehuda Pen, licensed under CC-BY-SA, full list of contributors on Wikipedia. 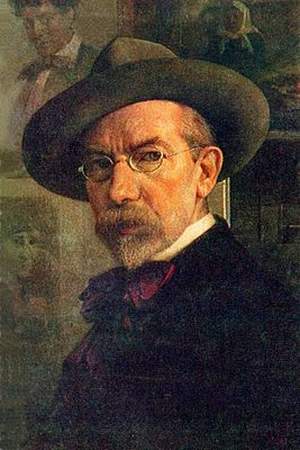