Violant was born in Zaragoza, the daughter of King James I of Aragon (1213–1276) and his second wife, Yolande of Hungary (ca.1215-1253). Her maternal grandparents were Andrew II of Hungary and Yolanda de Courtenay.

In January 1249, Violant married King Alfonso X of Castile at Burgos, who before his marriage, had a romantic relationship with Mayor Guillén de Guzmán who bore to him an illegitimate daughter Beatrice.

Due to Violant's young age, she was unable to get pregnant for several years. Alfonso came to believe that his wife was barren and came to even consider the possibility of asking the pope for an annulment of the marriage.

Legend has it that the Queen could not get pregnant and the doctor told her to rest. Alicante was recaptured by the Crown of Castile and the King and Queen rested in a farm located in the fields near the city, and there she became pregnant; the King decided to call the place "Pla del Bon Repos" ("Plain of good sleep"), a name that has been left to posterity and today is a suburb of Alicante.

In 1275, Violant's son and heir to Castile, Ferdinand de la Cerda, died heir to the Castilian-Leonese throne and Alfonso at first ignored the rights of Ferdinand's two sons, Alfonso and Fernando, and instead made their second son, Prince Sancho heir; he would later succeed as Sancho IV of Castile.

In response, the widow of Ferdinand, Blanche of France, enlisted the help of her brother, Philip III of France. At the same time, queen Violant sought support for her grandchildren from her brother, King Peter III of Aragon, who agreed to protect and guard them in the kingdom of Aragon, accommodating her grandchildren in the Castle of Xativa. During the reign of her son Sancho IV, and the latter's son, Ferdinand IV of Castile, Queen Violant lived almost permanently in Aragon and she supported the rights to the throne of Castile and León of her grandson, Alfonso de la Cerda.

Queen Violant died in Roncesvalles, Navarre, in 1301, on her return from Rome, where she had won the Jubilee in 1300.

Coat of arms of Violant of Aragon as Queen Consort of Castile.

Alfonso and Violant had the following children:

Wikimedia Commons has media related to Violante of Aragon.

Description above from the Wikipedia article Violant of Aragon, licensed under CC-BY-SA, full list of contributors on Wikipedia. 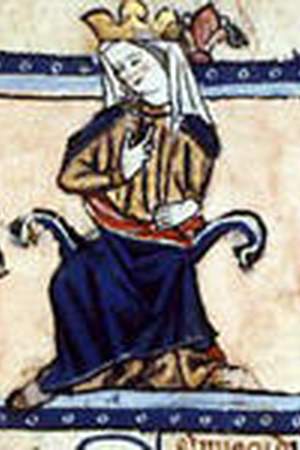