In this Spanish name, the first or paternal surname is Tomicic and the second or maternal family name is Petric.

Best known for televisions shows :on TVN and Canal 13 as Buenos Dias A Todos , Viña's International Festival and Bienvenidos. She's considered one of the most important females TV personalities of Chile. :After being a former fashion model in Chile , Tomicic become the face, and spoken celebrity :of "Almacenes Paris" a department store's since 2005 and Garnier's Chilean ambassador :since 2007, :her parents are Croatian immigrants to Chile.

She was born on May 31, 1976 in Antofagasta, Chile. her parents are Antonio Tomičić, and Marija Petrić, both Croatians immigrants to Chile. Tomicic grew up in the commune of La Florida, Santiago, she completed her primary and secondary education at the Colegio Argentino del Sagrado Corazón de Jesús, in Providencia, In 1994 she entered the Universidad Tecnológica Metropolitana to study design in visual communication, a career that she finally did not pursue.

She was discovered as a model by New Models Agency, in Chile as 14 yrs old , After the first contact, Tomičić filmed her first television commercial for the Tigre shoe company. She was crowned queen of the XXIV version of the Miss World 1995 Chilean Version pagated, and representing her country in the Miss World 1995 pageant held in South Africa. Her career as a beauty queen continued when she was crowned Virreina Sudamericana 1996 in Bolivia and Miss Atlántico Internacional 1999 in Uruguay.

In 2002 she was invited to the program Pase lo que Pase of TVN as a fashion commentator. She received her big break when she became one of the principal co-presenters of this program and went on to assume the co-presenter role of Buenos dias a todos, a popular morning television show. In February 2006, Tomicic was presenter of the Viña del Mar International Music Festival, in 2007 and 2008 with Sergio Lagos. In 2009 Tomic leaves "Buenos Dias a Todos" and TVN thanks to an offer from "Canal 13" to become the presenter of the morning program "Bienvenidos" and the prime shows: "El Hormiguero" , Tonka Tanka and as host of the reality show Mundos Opuestos.

Tomicic is currently face and spoken celebrity of Almacenes Paris department store chain since 2005, as well as the Claro telecommunications company and has beene the Garnier's Chilean brand ambassador since 2007, where there is a dye called "Chocolate Tonka".

Since 2004 she has been in a romantic relationship with Marco Antonio López Spagui, better known as Parived. The couple were married according to the Jewish rite on April 16, 2014 in the city of Jerusalem, Israel, after Tomičić renounced Catholicism, thus embracing her partner's Judaism.

Description above from the Wikipedia article Tonka Tomicic, licensed under CC-BY-SA, full list of contributors on Wikipedia. 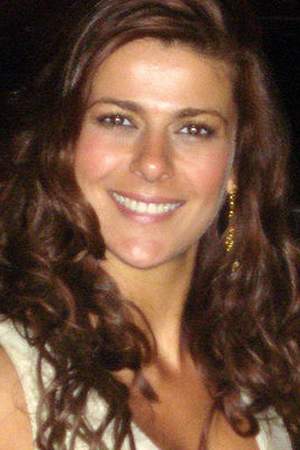