Andrei Tiberiu Maria (Romanian pronunciation: anˈdrej tiˈberju maˈri.a; born 27 July 1983 in Pitești, Argeș County, Romania), better known by his stage name Smiley, is a Romanian singer, songwriter, composer, record producer, and internet vlogger. He was part of the band Simplu and since then he developed a solo career. With more than 1 million singles sold from 2001, certified gold, he is the best-selling male artist and the most successful pop star in Romania. In 2013, he won "Best Romanian Act" during the MTV Europe Music Awards held in Amsterdam.He had been nominated as a solo act three times for the same award in 2008, 2009 and 2011 and twice in 2006 and 2007 as part of Simplu. He is part of the Romanian Euro-House project Radio Killer where he is known as Killer 1. As of November 2013, he is the new Goodwill Ambassador for UNICEF Romania. He is a television personality, having hosted Românii au talent for eleventh consecutive seasons (2011–present) and being a coach in Vocea României also for ninth consecutive seasons (2011–2019).

He started in music at a very young age. For three years he was part of the Romanian group Millenium 3 and was noted by Gyuri Pascu as a potential star. He also tried for the band Akcent in a bid to join the band.

After an invitation by CRBL, he joined the singing and dancing band Simplu (stylized as SIMPLU). The members were CRBL, Smiley, OmuNegru, Piticu and Francezu. Because of his reported cheerful attitude, he was nicknamed Smiley by the band, a name he adopted for his career, soon becoming the frontman of the band, at the same time developing a solo career.Simplu released five studio albums with Smiley: Oare știi (2002), Zece (2004), RMX Simplu (2006),Oficial îmi merge bine (2006) and "Dance or die trying" (2011) in addition to the compilation Simplu Best Of. In 2008, Smiley and Simplu won "Best show" during the dance program Istoria Dansului. In 2007–2008, he was also in the TV series One Step Ahead as Sebastian 'Seba' Novinski and subject of lead role in the 2008 film Un film simplu directed by Tom Gatsoulis.

Smiley has also formed the Romanian Euro-House project Radio Killer launched through an initiative of Smiley and his HaHaHa Production company. Radio Killer is made up of seven members:

The Real Killer: Paul DamixieThe group released the single "Be Free" in 2010 on Blanco Y Negro label, the international release "Lonely Heart" on various labels in Romania, France, Spain, Italy, Netherlands and Sweden in 2011 and "Don't Let The Music End" on EMI in 2012. The band also enjoys popularity in Russia. In 2013, Radio Killer released a joint EP Clothes Off with Francesco Diaz & Young Rebels with various mixes of their hit "Clothes Off".

In 2008, he had the lead role in the comedy Un film simplu by director Tom Gatsoulis. The comedy inspired by the group Simplu and Smiley's career, is about the difficult choices Smiley had to make: his bandmates and friends or international fame as he is confronted by an American talent scout who is offering him a lucrative deal provided he quits his band, Simplu. The band members realize what's going on and they don't like it.

Smiley has been a television personality co-hosting the TV show Românii au talent with Pavel Bartoș for eight consecutive seasons, starting with the inaugural season 1 in 2011.

He was also invited as a presiding judge in Vocea României, the Romanian version of the international music competition franchise The Voice. Ştefan Stan from Team Smiley won the first ever title in Romania for season 1 of the show. Ştefan Stan released his debut album Povestea mea with Smiley's production HaHaHa productions; releasing "You Give Me Love" written by his coach Smiley before signing a deal with Universal Music Romania.

Description above from the Wikipedia article Smiley (singer), licensed under CC-BY-SA, full list of contributors on Wikipedia. 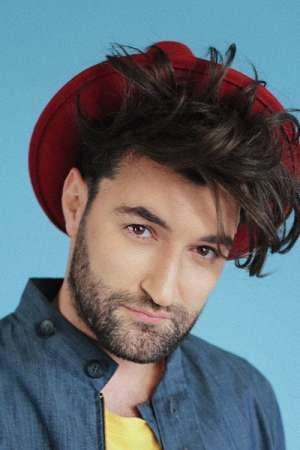