New Zealand physician and author on diving medicine Simon Mitchell returns from the 2002 world record dive to the wreck of the SS Kyogle. The dive re-opened the file on the AHS Centaur

Simon Mitchell (born 1958) is a New Zealand physician specialising in occupational medicine, hyperbaric medicine and anesthesiology. Trained in medicine, Mitchell was awarded a PhD for his work on neuroprotection from embolic brain injury. Mitchell has also published more than 45 research and review papers in the medical literature. Mitchell is an author and avid technical diver. He also wrote two chapters of the latest edition of Bennett and Elliott's Physiology and Medicine of Diving, is the co-author of the diving textbook Deeper Into Diving with John Lippmann and co-aut*d the chapter on Diving and Hyperbaric Medicine in Harrison's Principles of Internal Medicine with Michael Bennett.

Mitchell is a former vice president of the Undersea and Hyperbaric Medical Society (UHMS) and currently serves as the chairman of the organisation's diving committee. He became a Fellow of The Explorers Club of New York in 2006.

Mitchell has dual Australian and New Zealand citizenship. He lives in Auckland, New Zealand, with his wife Siân.

In 2010, Mitchell was awarded the Albert R. Behnke Award by the UHMS for his outstanding scientific contributions to advances in undersea biomedical activity.

On 23 August 2017 Mitchell delivered his inaugural lecture (as a full professor) at the Grafton Campus, Auckland, New Zealand.

Mitchell began diving in 1972. His diving primarily involves the use of rebreather technology to explore shipwrecks at extreme depths.

Mitchell was a member of "The Sydney Project" in 2004 and located the letters U, M, and E that helped with the positive identification of the SS *berland. In 2007, Mitchell and Pete Mesley were responsible for identification of the Port Kembla including recovery of the ship's bell. Mitchell attempted to recover a Robinson 22 helicopter engine from the poor underwater visibility of Lake Wanaka for use in the Transport Accident Investigation Commission investigation of the death of Morgan Saxton.

AHS Centaur was a hospital ship which was attacked and sunk by a *anese submarine off the coast of Queensland, Australia, on 14 May 1943. Of the 332 medical personnel and civilian crew aboard, 268 were killed. Following World War II, several searches of the waters around North Stradbroke and Moreton Islands failed to reveal Centaur’s location. It was believed that she had sunk off the edge of the continental shelf, to a depth the Royal Australian Navy did not, and still does not, have the capability to search for a vessel of Centaur’s size.

In 1995, it was announced that the shipwreck of Centaur had been located in waters 9 nautical miles (17:km) from the lighthouse on Moreton Island, a significant distance from her believed last position. The finding was reported on A Current Affair, during which footage of the shipwreck, 170 metres (560:ft) underwater, was shown. Discoverer Donald Dennis claimed the iden*y of the shipwreck had been confirmed by the Navy, the Queensland Maritime Museum, and the Australian War Memorial. A cursory search by the Navy confirmed that there was a shipwreck at the given location, which was gazetted as a war grave and added to navigation charts by the Australian Hydrographic Office.

Over the next eight years, there was growing doubt about the position of Dennis' wreck, due to the distance from both Second Officer Rippon's calculation of the point of sinking and where USS Mugford found the survivors. During this time, Dennis had been convicted on two counts of deception and one of theft through scams. Two wreck divers, Trevor Jackson and Simon Mitchell, used the location for a four-hour world record dive on 14 May 2002, during which they examined the wreck and took measurements, claiming that the ship was too small to be Centaur. Jackson had been studying Centaur for some time, and believed that the wreck was actually another, much smaller ship, the 55-metre (180:ft) long MV Kyogle, a lime freighter purchased by the Royal Australian Air Force and sunk during bombing practice on 12 May 1951. The facts gathered on the dive were inconclusive, but the divers remained adamant it was not Centaur, and p*ed this information onto Nick Greenaway, producer of the newsmagazine show 60 Minutes.

On the 60th anniversary of the sinking, 60 Minutes ran a story demonstrating that the wreck was not Centaur. It was revealed that nobody at the Queensland Maritime Museum had yet seen Dennis' footage, and when it was shown to Museum president Rod McLeod and maritime historian John Foley, they stated that the shipwreck could not be Centaur, as the rudder was incorrectly shaped. Following this story, and others published around the same time in newspapers, the Navy sent three ships to inspect the site over a two-month period; HMA Ships Hawkesbury, Melville, and Yarra, before concluding that the shipwreck was incorrectly identified as Centaur. An amendment was made to the gazettal, and the Hydrographic Office began to remove the mark from charts.

In April 2008, following the successful discovery of HMAS Sydney, several parties began calling for a dedicated search for Centaur. By the end of 2008, the Australian Federal and Queensland State governments had formed a joint committee and contributed $2 million each towards a search, and by February 2009, the tender for the project had received eleven expressions of interest.

In 2015, Mitchell was awarded a Bravo award by the New Zealand Skeptics for his rebuttal of claims in a The New Zealand Herald article about a Hyperbaric machine en*led ”Hope is in the air: Hyperbaric chambers – the real deal or a placebo?.

Description above from the Wikipedia article Simon Mitchell, licensed under CC-BY-SA, full list of contributors on Wikipedia. 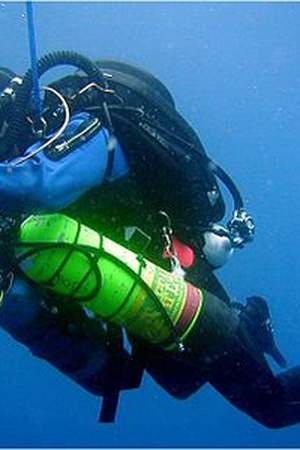