Sean Giambrone (born May 30, 1999) is an American actor. His on-screen roles include Adam F. Goldberg in the sitcom The Goldbergs and Ron Stoppable in the Disney Channel film Kim Possible. His voice acting credits include Yumyulack in Solar Opposites, Jeff Randell in Clarence, and Russell in Russell Madness.

Giambrone was born in St. Joseph, Michigan to a family of Italian and German descent, and raised in Park Ridge, Illinois, where he attended Lincoln Middle School and Maine South High School. As of 2019, he is based in Los Angeles, but often visits Park Ridge.

He took up acting at the age of 9, starring in television commercials for McDonald's and Friendly's Restaurants, among others. His first film role was as Afro Boy in I Heart Shakey.

In September 2013, Giambrone gained the part of Adam Goldberg, the youngest child of Wendi McLendon-Covey and Jeff Garlin's characters, Beverly and Murray, in the ABC comedy series The Goldbergs. As of 2021, it is in its ninth season.

In February 2014, Giambrone joined the voice cast of the animated series Clarence, which aired on Cartoon Network, providing the voice of Jeff Randell, the *le character's best friend. He also made an appearance in R.L. Stine's The Haunting Hour, and provided the voice of a bull terrier named Russell in the DVD film Russell Madness. He also was on the soundtrack for Kim Possible.

Starting in 2020, he has been voicing Ben Pincus in Jur*ic World: Camp Cretaceous.

Description above from the Wikipedia article Sean Giambrone, licensed under CC-BY-SA, full list of contributors on Wikipedia. 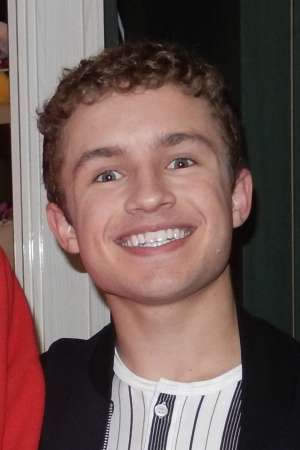