He was born in Kazerun in October 1236 to a family with a tradition of Sufism. His father, Zia' al-Din Mas'ud Kazeruni was a physician by profession and also a leading Sufi of the Kazeruni order. Zia' Al-Din received his Kherqa (Sufi robe) from Shahab al-Din Omar Suhrawardi. Qutb al-Din was garbed by the Kherqa (Sufi robe) as blessing by his father at age of ten. Later on, he also received his own robe from the hands of Najib al-Din Bozgush Shirazni, a famous Sufi of the time. Quṭb al-Din began studying medicine under his father. His father practiced and taught medicine at the Mozaffari hospital in Shiraz. After the p*ing away of his father (when Qutb al-Din was 14), his uncle and other masters of the period trained him in medicine. He also studied the Qanun (the Canon) of the famous Persian scholar Avicenna and its commentaries. In particular he read the commentary of Fakhr al-Din Razi on the Canon of Medicine and Qutb al-Din raised many issues of his own. This led to his own decision to write his own commentary, where he resolved many of the issues in the company of Nasir al-Din al-Tusi.

Qutb al-Din lost his father at the age of fourteen and replaced him as the ophthalmologist at the Mozaffari hospital in Shiraz. At the same time, he pursued his education under his uncle Kamal al-Din Abu'l Khayr and then Sharaf al-Din Zaki Bushkani, and Shams al-Din Mohammad Kishi. All three were expert teachers of the Canon of Avicenna. He quit his medical profession ten years later and began to devote his time to further education under the guidance of Nasir al-Din al-Tusi. When Nasir al-Din al-Tusi, the renowned scholar-vizier of the Mongol Holagu Khan established the observatory of Maragha, Qutb al-Din Shirazi became attracted to the city. He left Shiraz sometime after 1260 and was in Maragha about 1262. In Maragha, Qutb al-din resumed his education under Nasir al-Din al-Tusi, with whom he studied the al-Esharat wa'l-Tanbihat of Avicenna. He discussed with al-Tusi the difficulties he had understanding the first book of the Canon of Avicenna. While working in the new observatory, he studied astronomy under al-Tusi. One of the important scientific projects was the completion of the new astronomical table (zij). In his testament (Wasiya), al-Tusi advises his son ṣil-a-Din to work with Qutb al-Din in the completion of the Zij.

Qutb-al-Din's stay in Maragha was short. Subsequently, he traveled to Khorasan in the company of al-Tusi where he stayed to study under Najm al-Din Katebi Qazvini in the town of Jovayn and become his *istant. Some time after 1268, he journeyed to Qazvin, Isfahan, Baghdad and later Konya in Anatolia. This was a time when the Persian poet Jalal al-Din Muhammad Balkhi (Rumi) was gaining fame there and it is reported that Qutb al-Din also met him. In Konya, he studied the Jam'e al-Osul of Ibn Al-Athir with Sadr al-Din Qunawi. The governor of Konya, Mo'in al-Din Parvana appointed him as the judge of Sivas and Malatya. It was during this time that he compiled the books the Meftāḥ al-meftāh, Ekhtiārāt al-moẓaffariya, and his commentary on Sakkāki. In the year 1282, he was envoy on behalf of the Ilkhanid Ahmad Takudar to Sayf al-Din Qalawun, the Mamluk ruler of Egypt. In his letter to Qalawun, the Ilkhanid ruler mentions Qutb al-Din as the chief judge. Qutb al-Din during this time collected various critiques and commentaries on Avicenna's Canon and used them on his commentary on the Kolliyāt. The last part of Qutb al-Din's active career was teaching the Canon of Avicenna and the Shefa of Avicenna in Syria. He soon left for Tabriz after that and died shortly after. He was buried in the Čarandāb cemetery of the city.

Shirazi identified observations by the scholar Avicenna in the 11th century and Ibn Bajjah in the 12th century as transits of Venus and Mercury. However, Ibn Bajjah cannot have observed a transit of Venus, as none occurred in his lifetime.

Qutb al-Din had an insatiable desire for learning, which is evidenced by the twenty-four years he spent studying with masters of the time in order to write his commentary on the Kolliyāt. He was also distinguished by his extensive breadth of knowledge, a clever sense of humor and indiscriminate generosity. He was also a master chess player and played the musical instrument known as the Rabab, a favorite instrument of the Persian poet Rumi.

Religion, Sufism, Theology, Law, Linguistics and Rhetoric and others

Qutb al-Din was also a Sufi from a family of Sufis in Shiraz. He is famous for the commentary on Hikmat al-ishraq of Suhrawardi, the most influential work of Islamic Illuminist philosophy.

Description above from the Wikipedia article Qutb al-Din al-Shirazi, licensed under CC-BY-SA, full list of contributors on Wikipedia. 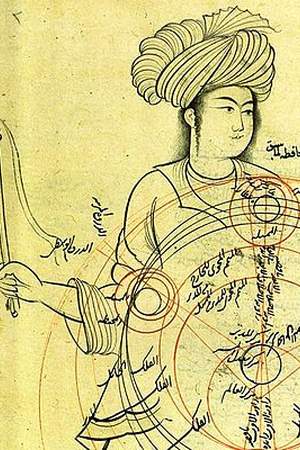