Patrick Vieira is a 46 years old footbaler from France from Dakar. He was born on June 23, 1976 in Dakar. Patrick Vieira is a retired French footballer who is the Manager of the Reserves squad at Premier League club Manchester City known as the Elite Development Squad. He rose to prominence during a hugely successful spell at Arsenal from 1996 to 2005 where he eventually became club captain and won three Premier League titles – one unbeaten – and four FA Cups. He transferred from Arsenal in 2005 and spent one season at Juventus helping the team to the Serie A championship.
Read full biography

He has a net worth of 33 million dollars.

There are 2 movies of Patrick Vieira.

His first feature film was Arsenal 49 - The Complete Unbeaten Record (2004, as Patrick Vieira). He was 28 when he starred in this movie. Since 2004, he has appeared in 2 feature films. The last one is Zidane, un destin d'exception (2007). In this movie, we watched him as himself .

Awarded Knight of the Legion of Honour in 1998 .

How tall is Patrick Vieira?

When is Vieira's next birthday?

Other facts about Patrick Vieira

Patrick Vieira Is A Member Of 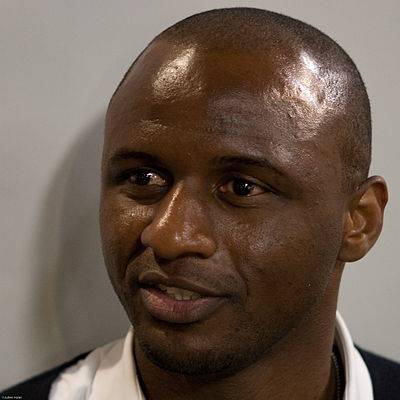