Muhammad Ayyub ibn Muhammad Yusuf ibn Sulaiman `Umar is a Saudi Arabian imam qari and Islamic scholar known for his recitation of the Quran. He is a former imam of Al-Masjid an-Nabawi the second-holiest site in Islam in Medina Saudi Arabia. read more

Muhammad Ayyub Is A Member Of 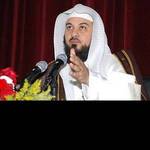