Muhammad bin Abdul-Rahman al-Arifi (Arabic: محمد بن عبد الرحمن العريفي‎, born 15 July 1970) is a Muslim author and Da’i. He is a graduate of King Saud University, and member of the Muslim World League and the Association of Muslim Scholars.

Al-Arefe has over 20 million followers on Twitter. As of 6 May 2019, Al-Arefe had over 24 million likes on Facebook, which places his account in the top 100 worldwide, and #10 in the Arab world and in the Middle East. BBC claims that Al-Arefe is regarded as a scholar "Brad Pitt". Al-Arefe announced his fatwa for "jihad" against Syrian to his jihadist followers on social media.

Al-Arefe engaged in a diatribe against Shias, referred to them as "evil", used the label of "infidel" against Shia cleric Ayatollah Sistani and boasted that there are no mausoleums, public statues, Christian crosses in Saudi Arabia. Al-Arefe described Jews as cowardly in battle and claimed that their tanks had urine and feces in them since they wouldn't get out of them. He also claimed they used bags or diapers in the tank. He described Jews as too cowardly to fight and said they were going to hide around the Gharqad trees they were allegedly planting.

Muslim Brotherhood affiliation was denied for Arefe and Adil al-Kalbani by al-Kalbani, saying that they are affiliated with the Union of Muslim Scholars.

A video Al-Arefe was posted by Ibrahim al-Musalem on a tweet about the Charlie Hebdo shooting.

Holiday celebrations and greetings to Christians by Muslims was banned by Al-Arefe. He strictly explicitly banned religious greetings to non-Muslims. Al-Arefe forbade the usage of Christmas trees.

He said that Syria jihad is incumbent and did apologia for al-Nusra, visiting the Imam Muhammad ibn Abd al-Wahhab Mosque in Qatar.

In July 2015, Al-Arafe wrote a critique on Facebook of the Egyptian Ramadan TV series Jewish Quarter, complaining that it showed Jews in a positive light, when in reality Jews were terrible people. It was picked up by Arabic media.

In March 2014, he was banned by the Home Office from returning to Britain after a series of sermons in Cardiff, Birmingham and London. A Home Office spokesperson said: "We can confirm Mohammad Al-Arefe has been excluded from the United Kingdom. The Government makes no apologies for refusing people access to the UK if we believe they represent a threat to our society. Coming here is a privilege that we refuse to extend to those who seek to subvert our shared values."

Al-Arefe had a discussion with Saudi Deputy crown prince Mohammad bin Salman Al Saud and then tweeted and posted a photo of them smiling together. The discussion was held on the same day as Saudi Vision 2030 began. He asked God to bless Prince Mohammad and posted his thanks. al-Arefe met with Prince Mohamed bin Salman again and talked with him and posted the photo of them smiling together on Twitter. They talked about the Islamic world's and the Kingdom (of Saudi Arabia's) future.

Arifi on Twitter vowed for Russia and Assad to be defeated over the Battle of Aleppo.

Condolences over the death of the son of Salman al-Ouda and his wife were given on Twitter by Mohamad al-Arefe.

Abdul Razzaq al-Mahdi, Nabil Al-Awadi, Tariq Abdelhaleem, and Hani al-Sibai who are linked to Al-Qaeda, in addition to others like Adnan al-Aroor, Abd Al-Aziz Al-Fawzan, Mohamad al-Arefe, Abdul Rahman Al-Sudais, Abdul-Aziz ibn Abdullah Al Shaykh and others were included on a death list by ISIS.

Al-Arefe's Twitter account was suspended in 2018. Since that time he was rarely seen in public. In February 2021 it was reported that al-Arefe is under watch by Saudi government authorities and that his moves and actions are being followed using spy devices and a tracking knee band.

In July 2013, Al-Arefe was detained by the Saudi authorities for using YouTube to criticize the military coup d'état in Egypt, an ally of Saudi Arabia. It was speculated that the arrest was in response to a complaint filed by the Egyptian Ministry of Foreign Affairs to its Saudi counterpart. The complaint claimed that Al-Arefe was intervening in Egyptian domestic affairs. Before his release, he signed a pledge not to interfere in Egyptian affairs and was released afterwards but placed under house arrest. He was also banned from traveling to Doha, where he was scheduled to deliver a religious lecture there. The Saudi authorities never announced the reason behind Al-Arefe's arrest.

In October 2014, he was jailed for 40 days for stating that the train linking Mecca and other holy sites was "one of the worst in the world". Al-Arefe was banned from entering Switzerland for holding extreme views, Switzerland said.

Denmark banned him from entering the country for two years in May 2017.

Description above from the Wikipedia article Mohamad al-Arefe, licensed under CC-BY-SA, full list of contributors on Wikipedia. 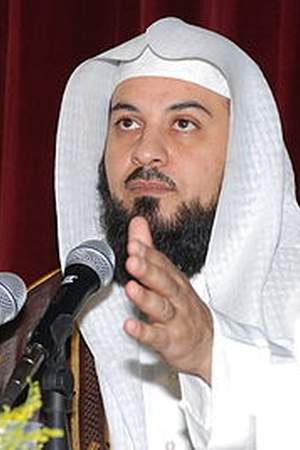