Max Kellerman (born August 6, 1973) is an American sports television personality and boxing commentator. He is the host of This Just In with Max Kellerman on ESPN. He previously was a co-host of ESPN talk show First Take alongside Stephen A. Smith and Molly Qerim. He also previously was the co-host of the sports radio talk show Max & Marcellus, with Marcellus Wiley, on ESPNLA. Kellerman hosted the ESPN panel talk show Around the Horn from the show's incarnation in 2002 until 2004 and co-hosted the sports comedy talk show SportsNation, alongside Wiley and Michelle Beadle, from 2013 until 2016. He was also a studio commentator with Brian Kenny on Friday Night Fights and a color commentator for HBO World Championship Boxing and Boxing After Dark.

Kellerman's first broadcasting experience was as a teenager on a New York City public-access television cable TV program on professional boxing called Max on Boxing. Given the medium, the show was quite simple but nevertheless caught the attention of the boxing community, including a young Mike Tyson.

In the late 1990s after graduating from Columbia University with a degree in history, Kellerman was hired as an *yst on ESPN's boxing series Friday Night Fights where he met future radio partner Brian Kenny. In November 2002 he was given his own show and, influenced by Pardon the Interruption, became the architect and original host of ESPN's Around the Horn. While the show was incredibly popular, Kellerman and ESPN could not reach an agreement for him to remain with the network, and Kellerman left the network in early 2004 to host a new show called I, Max on Fox Sports Net. He would discuss sports news with Michael Holley, former Around the Horn panelist, and Bill Wolff. Max took time off from the show after his brother's death (see below). He later returned, but despite his show garnering the network's highest ratings for a period of time, it was canceled by Fox. The last I, Max show aired on February 18, 2005. Max also was the co-host of Spike TV's 2006 series, King of Vegas.

In 2005, Tucker Carlson announced that Kellerman would be a permanent contributor on his MSNBC show Tucker. On a segment of the show called "The Outsider", Kellerman generally took the position selected by Carlson. Frequently, Carlson introduced Kellerman with a bio containing a humorously enthusiastic compliment. The show was canceled in March 2008.

Starting in the week of August 21, 2006, Kellerman did at least two nights of audition shows at 7 PM for WEPN (1050) 1050 ESPN Radio in New York City, hosting one night with Sid Rosenberg. On August 28, 2006, it was announced that Brandon Tierney would be taking over at 7 PM, which temporarily left Kellerman without a timeslot. On October 23, 2006, Max began hosting the 10 AM to noon program on WEPN, replacing ESPN's nationally broadcast Colin Cowherd program. In September 2007, Kellerman began hosting a third hour, extending the show to 1 pm. Two months later, ESPNEWS and SportsCenter host Brian Kenny joined the show as co-host. On February 4, 2008, the show was added to XM Radio on ESPN Xtra. In the fall of 2008, Kenny left the radio program to attend to his SportsCenter duties and the program was again named The Max Kellerman Show.

Kellerman continued his boxing broadcast work at HBO. He was originally hired for the network's Boxing After Dark telecasts, working alongside Fran Charles and Lennox Lewis. In 2007, Kellerman moved up to the HBO World Championship Boxing main team alongside Jim Lampley, Harold Lederman, and a rotating guest *yst, usually Roy Jones Jr. or the late Emanuel Steward.

On May 12, 2010, it was announced Kellerman had been hired by CNN: "Kellerman will weigh in on sports and pop culture issues on CNN American Morning and other programs. He has previously served as a contributor to MSNBC."

In May 2015, Kellerman covered the Floyd Mayweather, Jr. vs. Manny Pacquiao boxing match for HBO. He received criticism online for his post-match interview with Manny Pacquiao. The Guardian stated that his line of questioning was, "interpreted as patronizing" as his wording to Pacquiao was "You thought you won today, Why?" However, Kellerman retorted that he "had to ask him" about his disagreement with the judges' adjudication.Kellerman has replaced Skip Bayless on ESPN's First Take as co-*yst alongside Stephen A. Smith and host Molly Qerim, effective July 25, 2016.

With HBO leaving the boxing business at the end of 2018, Kellerman signed a multiyear contract with ESPN which greatly expanded his role in the network's boxing coverage. However, in contrast to his color-commentary role with HBO, for ESPN he is presiding over network coverage from the broadcast desk rather than at ringside.

Kellerman made a brief appearance in the 2006 film Rocky Balboa alongside Lampley and Merchant, who served as the broadcast team for the fight between Rocky and Mason "The Line" Dixon. He would also make an appearance in the 2015 film Creed, as the reporter interviewing Donnie Creed at the conclusion of his fight with "Pretty" Ricky Conlan.Kellerman played himself in the short film The Wedding Bout.

Kellerman played himself in Real Husbands of Hollywood.

Kellerman was born in The Bronx, and grew up in the Greenwich Village area of New York City. He graduated from New York City's PS 41 in Greenwich Village, Hunter College High School in 1991 and, later, Columbia University in 1998. Kellerman and his wife, Erin (Manning), have three daughters, Esther, Sam (named after Max's late brother), and Mira.

He has pointed out on Tucker that "Max" is not short for anything, and that he does not have a middle name. Kellerman is active in Jewish cultural activities and, according to The Forward and the Yiddish Book Center, speaks Yiddish. Max is a hip hop fan, evidenced by his intro music on his ESPN Radio show. Kellerman's favorite artists include the Wu-Tang Clan, having stated on his radio show that Raekwon's Only Built 4 Cuban Linx... is one of his favorite albums. Kellerman was also a member of a hip hop group with his brother Sam, under the name "Max and Sam". They were signed under Columbia Records in 1994 and recorded a music video *led "Young Man Rumble".

Kellerman has a small permanent scar on the left side of his mouth from a childhood accident with an electrical outlet.

Kellerman is a fan of the New York Giants and New York Yankees.

Murder of his brother

Born on November 24, 1974, Sam Kellerman grew up in Manhattan while attending Stuyvesant High School. He was 15 months younger than Max, and the second of the four brothers in the Kellerman family. As an aspiring young artist, Kellerman wrote a play called The Man Who Hated Shakespeare and hosted a public-access cable-television show. On October 17, 2004, Sam Kellerman's body was found inside his apartment in the 1400 block of Vista Street in Los Angeles. As a result of the ensuing investigation, former boxer James Butler was arrested and charged with Sam's murder. He later confessed to the murder and was given a 29-year sentence.

Sam Kellerman was 29 years old. In speaking about his brother, Max Kellerman recalls that " was a creative genius... He was the best writer for his age I've ever read. I used to tell him, 'I'll always be able to get someone to pay me for talking, and you'll always be able to get someone to pay you for writing.' When it came to writing, I felt like Salieri to Sam's Mozart. Sam wanted to direct film, but I think he was fated to write and be in front of the camera. He was starting to get work as an actor. He was in several national commercials. And acting wasn't even what he did best. Sam was a sure thing. It was just a matter of time before he made it big."

Kellerman is a proponent of sabermetrics and has hosted many practicing sabermetricians on his radio show. He also believes that Roger Maris should still be considered the single-season home run record holder at 61 because of * accusations towards players such as Barry Bonds, Mark McGwire, and Sammy Sosa.

Description above from the Wikipedia article Max Kellerman, licensed under CC-BY-SA, full list of contributors on Wikipedia. 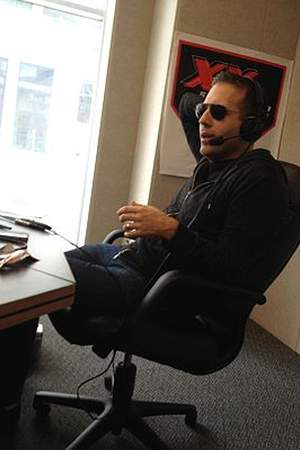