Leslie Anderson Stephes (born March 30, 1982 in Guantánamo) is a first baseman/outfielder who is currently a free agent.

Anderson previously played for the Cuban national baseball team and Camagüey of the Cuban National Series. He was part of Cuba's roster at the 2006 and 2009 World Baseball Cl*ics.

Anderson, who is primarily a center fielder, hit .363 during the 2005-06 season. Anderson defected from Cuba and signed a four-year contract worth $1.7 million with the Tampa Bay Rays prior to the 2010 season. Released by the Rays after the 2013 season, Anderson signed with the Yomiuri Giants. He finished the 2014 NPB season with a batting average of .319, along with 15 home runs and 50 RBIs.

On 2 December 2016 it was confirmed that Anderson had been released by the Giants.

In 2020, Anderson became the second Cuban player after Erisbel Arruebarrena to come back to the Serie Nacional after defecting and playing for a Major League organization when he signed for the Toros de Camagüey.

Description above from the Wikipedia article Leslie Anderson, licensed under CC-BY-SA, full list of contributors on Wikipedia. 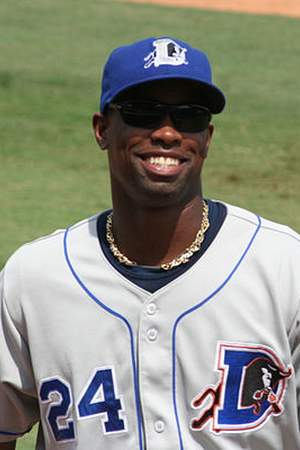