Japanese singer-songwriter, frontman for the Southern All Stars (1956-)Musical artist

Keisuke Kuwata (桑田 佳祐, Kuwata Keisuke, born February 26, 1956) is a Japanese multi-instrumentalist, singer-songwriter, and frontman for the Southern All Stars, as well of his own solo band, the Kuwata band. He has also done a significant amount of scoring music for films. He went to Aoyama Gakuin University.

Kuwata has worked as a record producer, a movie director, has recorded albums as bandleader of his own band, the Kuwata Band, and has worked on projects scoring music to film.

Kuwata's wife, Yuko Hara, is also a member of the Southern All Stars. She is a vocalist and plays keyboards. The two met while in college, where they were in the same circle of musicians. They married in 1982, after the success of the band's single Chako no Kaiganmonogatari, and invited 3000 fans of the band to their wedding reception. They share a love of the blues and have two sons together.

On July 28, 2010, Kuwata announced that he had been diagnosed with esophageal cancer. The operation to remove the cancer was successful and he has made several public appearances since June 2011.

Kuwata's Western musical influences are varied. Along with his wife, the band's keyboardist and backing vocalist, Yuko Hara, the couple have long been inspired by American folk music, where preferences run from Bob Dylan, The Band, Blues, and Southern rock music, to British and American influences that are arguably pure rock and Roll; with a flattering number of songs covered from the work of Eric Clapton.

Aside from Dylan, Kuwata's work has shown emphasis on music of the American South, including that of Creedence Clearwater Revival and Little Feat. Along with the Southern All Stars, Kuwata has performed with Little Feat on several occasions, and recorded cover songs from the band. He was a participant and performer in a tribute concert to the late Lowell George, (Little Feat's original frontman), recording a medley on video that contained his version of "Dixie Chicken".

In 1991, Kuwata began a series of concerts, similar to MTV Unplugged performances, called the "Acoustic Revolution", featuring Hirokazu Ogura on guitar, and Yoshiyuki Sahashi on mandolin, along with other musicians using acoustic instruments. Here again, Dylan's influence shone through their work choosing standards including "Like a Rolling Stone".

Kuwata also developed a love for rock music. The influence from Eric Clapton is strong and can be heard even when Kuwata performs songs in same manner and style as those that Clapton himself covered, and did not write. In addition, other artists covered have been Jimi Hendrix, Bob Marley, and Sam Cooke.

In 1994, the "On Air Music Fair", "I Shot the Sheriff" by Bob Marley was performed by Kuwata and Ann Lewis.

Kuwata has performed with his band, and collaborated with several others annually to donate money towards AIDS research and treatment. To draw the largest possible audiences, Kuwata performs additional Western songs so the concerts are more inclusive. Depending upon the year of the concert, sometimes the chosen songs have a theme.

Kuwata has been joined in benefit concerts by other bands and musicians. Most notable is the frequent appearance of Yamagen:, a band featuring guitarists Hirokazu Ogura (小倉 博和, Ogura Hirokazu) and Yoshiyuki Sahashi (佐橋 佳幸, Sahashi Yoshiyuki). The band features a combination of jazz, blues, and rock, along with their own combination of ambient experimental music. Yamagen is considered a "guitar support unit", in the same way Westerners would think of a horn section. Some of these concert songs included:

Kuwata directed the movie, Inamura Jane, for which he composed the music. It was released on September 8, 1990, by Toho. Previously, he composed the music for Aiko 16-sai in 1983, which won the Award of the Japanese Academy for Newcomer of the Year, and the Yokohama Film Festival's Festival Prize for Yasuko Tomita as Best New Actress. He has also written the scores for several Japanese films. Kuwata wrote the theme song, "Ashita Hareru Kana", featured in the popular Japanese television drama series, Operation Love, which won the award for "Best Television Theme Song" at the 53rd Japanese Television Awards, in 2007.

Description above from the Wikipedia article Keisuke Kuwata, licensed under CC-BY-SA, full list of contributors on Wikipedia. 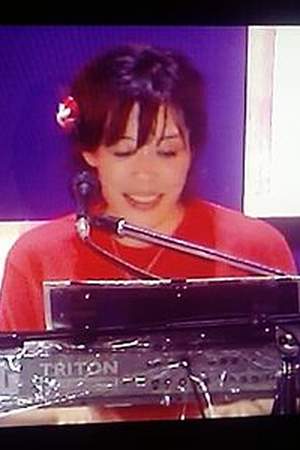