Avram Joel Spolsky (born 1965) is a software engineer and writer. He is the author of Joel on Software, a blog on software development, and the creator of the project management software Trello. He was a Program Manager on the Microsoft Excel team between 1991 and 1994. He later founded Fog Creek Software in 2000 and launched the Joel on Software blog. In 2008, he launched the Stack Overflow programmer Q&A site in collaboration with Jeff Atwood. Using the Stack Exchange software product which powers Stack Overflow, the Stack Exchange Network now hosts over 170 Q&A sites.

Spolsky was born to Jewish parents and grew up in Albuquerque, New Mexico, and lived there until he was 15. He then moved with his family to Israel, where he attended high school and completed his military service in the Paratroopers Brigade. He was one of the founders of the kibbutz Hanaton in Lower Galilee. In 1987, he returned to the United States to attend college. He studied at the University of Pennsylvania for a year before transferring to Yale University, where he was a member of Pierson College and graduated in 1991 with a BS summa * laude in Computer Science.

Spolsky started working at Microsoft in 1991 as a Program Manager on the Microsoft Excel team, where he designed Excel Basic and drove Microsoft's Visual Basic for Applications strategy. He moved to New York City in 1995 where he worked for Viacom and Juno Online Services. In 2000, he founded Fog Creek Software and created the Joel on Software blog. Joel on Software was "one of the first blogs set up by a business owner".

In 2005, Spolsky co-produced and appeared in Aardvark'd: 12 Weeks with Geeks, a do*entary do*enting Fog Creek's development of Project Aardvark, a remote *istance tool.

In 2008, Spolsky co-founded Stack Overflow, a question and answer community website for software developers, with Jeff Atwood. He served as CEO of the company until Prashanth Chandrasekar succeeded him in the role on October 1, 2019. Spolsky remains the company's Chairman.

In 2016, Spolsky announced the appointment of Anil Dash as Fog Creek Software's new CEO, with Spolsky continuing as Stack Overflow's CEO and as a Fog Creek Software board member. The company has since been renamed Glitch.

He is the author of five books, including User Interface Design for Programmers and Smart and Gets Things Done. He is also the creator of "The Joel Test".

Spolsky coined the term fix it twice for a process improvement method. It implies a quick, immediate solution for fixing an incident and a second, slower fix for preventing the same problem from occurring again by targeting the root cause. His use of the term Shlemiel the painter's algorithm, referring to an algorithm that is not scalable due to performing too many redundant actions, was described by salon.com's Scott Rosenberg as an example of good writing "about their insular world in a way that wins the respect of their colleagues and the attention of outsiders."

Spolsky made an appearance at the WeAreDevelopers Conference 2017, stating how developers are writing the script for the future. In his speech, Spolsky talks about how software is eating the world, how it is becoming more evident in everyday life as people interact with more software on a day-to-day basis, and how developers are helping to shape how the world will work as technology keeps evolving. He uses the metaphor "we are just little vegetables floating in software soup", referring to our constant use of software for the most mundane activities, including work, social networking, and even taking a cab.

In December 2019, Spolsky revealed he was the Chairman of an open-source simulation startup called HASH.

In 2015, Spolsky announced his marriage to his husband, Jared, on social media and his blog. He lives on the Upper West Side of Manhattan.

Description above from the Wikipedia article Joel Spolsky, licensed under CC-BY-SA, full list of contributors on Wikipedia. 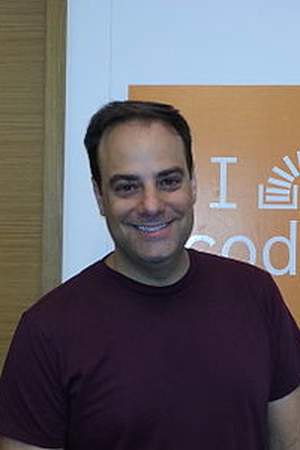