Jenny Ann Mollen Biggs (born May 30, 1979) is an American actress and New York Times-best selling author. Mollen is known for her portrayal of Nina Ash on the television series Angel, Viva Laughlin, the 2008 TV series Crash, and Girls. Mollen has published two collections of essays, and has written articles for various publications, including Cosmopolitan and Parents, among others.

Mollen was born in Phoenix, Arizona. Mollen's father is Jewish, and she was raised culturally Jewish. She has a sister and a half-brother. In the late 1990s, Mollen graduated from Chaparral High School in Scottsdale, Arizona. She studied theater and graduated from UCLA School of Theater, Film and Television.

Mollen worked in local theater as a child. She worked at Old Globe Theatre in San Diego, California, the Idyllwild Arts Academy, and the Oregon Shakespeare Festival in Ashland, Oregon.

In 2005, Mollen announced in an interview about her plans to perform in London in a play she wrote about her dog.

In 2009, Mollen wrote the short film Kidnapping Caitlynn, which stars Jason Biggs, Julie Benz and herself. The film is directed by Katherine Cunningham Eves.

In 2016, Mollen co-starred with her husband Jason Biggs as fictional husband and wife characters in comedy film Amateur Night.

In 2012 and 2013, Mollen wrote a humor column for The Smoking Jacket, a website affiliated with Playboy, as well as an advice column for Playboy.

In June 2016, Mollen published a follow-up, Live Fast Die Hot, which also subsequently became New York Times Best Seller at #8 in Humor. In August 2016, it was reported that the film rights had been acquired by Warner Bros. with Anne Hathaway attached to star and Mollen attached to write and executive produce.

Mollen met actor Jason Biggs while filming My Best Friend's Girl and they were engaged by January 2008. On April 23, 2008, the couple eloped and got married in Los Angeles, California. In July 2008, they had a formal wedding ceremony in Napa Valley. Their son, Sid, was born on February 15, 2014. Their second son, Lazlo was born on October 2, 2017. After living in Los Angeles for some time, the Biggs family moved to New York City in 2018.

Description above from the Wikipedia article Jenny Mollen, licensed under CC-BY-SA, full list of contributors on Wikipedia. 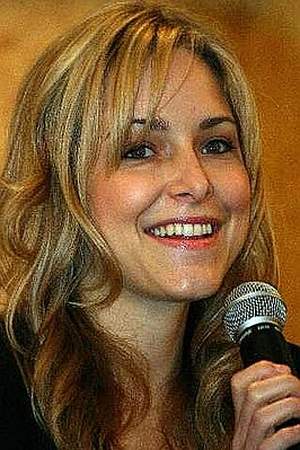