Jeff Habberstad has been working in film for over 20 years. Starting as a stuntman specializing in aerial work, Jeff quickly made a name for himself, winning the award for "Best Aerial Stunt" in the first ever Stunt Awards in 1985. Jeff has gone on to receive 4 Emmy nominations, winning the Emmy for an action sequence he directed for the TV series,.. .
Read full biography

There are 23 movies of Jeff Habberstad.

Other facts about Jeff Habberstad

Jeff Habberstad Is A Member Of 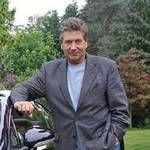