James Mikely Mantell Posey Jr. (born January 13, 1977) is an American former professional basketball player. He played the small forward position for the Denver Nuggets, the Miami Heat, the Boston Celtics, the New Orleans Hornets, and the Indiana Pacers in the National Basketball Association (NBA). Posey won NBA championships as a member of the 2006 Miami Heat and the 2008 Boston Celtics. He is also a former assistant coach for the Cleveland Cavaliers of the NBA.

After attending High School in Twinsburg, Ohio, Posey came to Xavier University in the 1995–96 season, but under Prop 48 rules, was ineligible, so sat out his freshman year. Posey ranks 16th on Xavier's all-time scoring list with 1,455 points and 10th on Xavier's all-time rebounding list with 801. Posey led XU in rebounding in each of his three seasons as a Musketeer. Posey earned a long list of honors while at Xavier, including the 1998 Atlantic 10 Championship "Most Outstanding Player" Award in helping XU win its first-ever A-10 Tournament Championship. Posey earned the A-10's "Sixth Man Award" twice and was named 1999 A-10 First Team and 1999 A-10 Defensive Player of the Year. He did all of that while not being a consistent starter in the Xavier lineup, almost always coming off the bench and Posey became well sought after from several sports agents such as Bill Duffy, Andy Miller, Craig McKenzie and Mark Bartelstein. With their permission Posey allowed his interviews to be held in front of the media of the Cincinnati Enquirer.

Posey was selected out of Xavier University by the Denver Nuggets with the 18th pick of the 1999 NBA draft. He played a little over three seasons with the team before being sent to the Houston Rockets in a three-team deal also involving the Philadelphia 76ers on December 18, 2002.

After finishing the season with the Rockets, he signed with the Memphis Grizzlies as a free agent in the 2003 off-season.

After that somewhat disappointing regular season with Miami, Posey performed much better in the playoffs than expected. He had been a starter during the regular season, but head coach Pat Riley made the change of having Posey come off the bench for the playoffs. As the Heat's sixth man, Posey was able to average 11.8 points per game on 48.8% shooting against Miami's first-round opponent, the Chicago Bulls. Against Miami's second-round opponent, the New Jersey Nets, Posey was forced to play defense, particularly guarding Vince Carter or Richard Jefferson. Although Posey's scoring dropped, his defense was said to have been the key to the Heat's advancement into the conference finals.

Posey again had to focus on defense against Miami's third-round opponent, the Detroit Pistons, particularly guarding Richard Hamilton, Tayshaun Prince, and even sometimes Chauncey Billups or Rasheed Wallace. Posey's defense was able to take the pressure off of Miami's scorers like Dwyane Wade, Jason Williams and Antoine Walker so that they could focus on their strengths on the offensive end.

In the 2006 NBA Finals against the Dallas Mavericks, Posey was a key factor on both ends of the court. Defensively, he, along with Udonis Haslem, provided tough defense on the Mavericks All-Star, Dirk Nowitzki. He also guarded Josh Howard, who had caused problems for Miami when Antoine Walker was guarding him. On the offensive end, Posey played a huge role in knocking down shots as a result of Miami's All-Stars, Wade and Shaquille O'Neal, being double-teamed and needing to pass the ball. In Game 4 of the Finals, Posey was very impressive in Miami's blowout, scoring 15 points and grabbing 10 rebounds. In Game 6, Posey hit a huge shot to give Miami an 87–81 advantage with four minutes remaining; Miami would win the game 95–92. Posey averaged 7.3 points and 6 rebounds in the Finals.

On July 1, 2006, Posey exercised his $6.4 million contract option, opting not to become a free agent. He only played in 4 playoff games in the 2006–07 season, because the Heat were eliminated in the first round.

On August 25, 2007, Posey signed with the Boston Celtics, adding to their revamped roster, including newcomers Kevin Garnett and Ray Allen. Terms of the deal were roughly $6.67 million over 2 years, with the second year being Posey's option. In the 2008 NBA Finals, Posey would win his second NBA championship, once again helping his team with tough defense and timely baskets at crunch time. On June 30, 2008, in a widely anticipated move, Posey opted out of the second and final year of his contract with the Celtics and became an unrestricted free agent, but had stated that he wanted to return to the Celtics on a new contract.

On July 16, 2008, Posey signed with the New Orleans Hornets, accepting a four-year deal worth about $25 million.

On August 11, 2010, New Orleans sent Posey, along with Darren Collison, to the Pacers in a four-team, five-player trade with the New Jersey Nets and the Houston Rockets. On December 12, 2011, Posey was amnestied by the Pacers.

In September 2013, Posey was hired by the Canton Charge as an assistant coach for the 2013–14 season.

On August 19, 2014, Posey was hired by the Cleveland Cavaliers as an assistant coach for the 2014–15 season. In his second season with the Cavaliers, the team earned the 2016 NBA Finals Championship over the 73-win Golden State Warriors.

James Posey currently has a weekly Podcast titled “The Posecast" on the Basketballnews.com Podcast Network where he's joined by his former teammates and people from around the NBA. He also writes weekly articles for the site focused on the NBA.

On April 9, 2007, Posey was arrested on a DUI charge and was taken to Dade County Jail. However, Posey continued playing with the Heat and coach Pat Riley stated he would support Posey.

Posey was suspended for the opener of the 2007–08 season by NBA commissioner David Stern after his no contest plea to reckless driving stemming from the DUI incident.

As a member of the Miami Heat, Posey had been involved in several controversial incidents with the Chicago Bulls.In Game 3 of the Chicago Bulls:– Miami Heat first round match Kirk Hinrich was moving down the court when Posey hit Hinrich with a hard shoulder block knocking Hinrich down to the floor, was called for a Flagrant-2 Foul, and was ejected from the game. When asked about the shot to Hinrich, Posey responded, "I was just trying to get back on defense and cut the ball off." "He didn't see me and that's how collisions happen. That's all it was." When asked if he thought Posey was looking for trouble, Hinrich said, "I don't know. Maybe he was. I guess he just wanted to make a hard foul. Sometimes that's part of the game." The shot would also lead to Posey getting suspended for 1 game.

In the season opener of the 2006–07 NBA season, Posey was involved with another incident with Bulls rookie Tyrus Thomas, who was going for the rebound, was hit in the face by Posey which led to Thomas having his nose broken and missing a few games, and having to wear a protective mask for multiple games.

In this, his third incident with the Bulls at the United Center, Posey was ejected from the game with 7:16 remaining in the fourth quarter on December 27, 2006. Luol Deng, who attempted a layup, was fouled by Posey in mid-air. Deng fell hard on his wrist, which he had had surgery on just a year earlier, but it was not broken. Posey was called for a flagrant-2 foul and ejected. Posey was suspended for 1 game as a result of his infraction.

Description above from the Wikipedia article James Posey, licensed under CC-BY-SA, full list of contributors on Wikipedia. 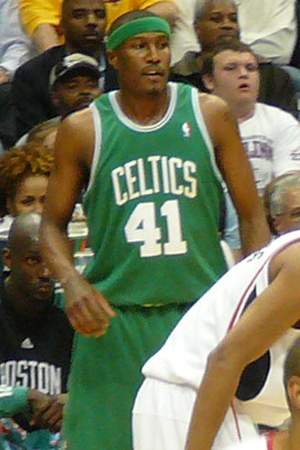