James M. Stayer is a historian specializing in the German Reformation particularly the anabaptist movement. He is also a Professor Emeritus at Queen's University in Kingston Ontario Canada. Born in Lancaster County Pennsylvania Stayer received his PhD from Cornell University in 1964. After teaching at Ithaca College Bridgewater College and Bucknell University he moved to Canada in 1968 to teach at Queen's University. He became a Canadian citizen in 1977. read more

James M. Stayer Is A Member Of 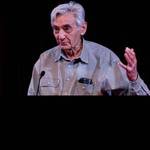 Historian Of The Modern Age