Jack Bicknell is a retired American football coach most recently known for his long involvement in NFL Europa and its predecessor the World League of American Football. He served as the head football coach at the University of Maine from 1976 to 1980 and at Boston College from 1981 to 1988 compiling a career college football record of 77–90–2.
Read full biography

When is Bicknell's next birthday?

Other facts about Jack Bicknell

Jack Bicknell Is A Member Of 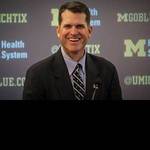