Spanish footballerIn this Spanish name, the first or paternal surname is Sánchez and the second or maternal family name is Cortés.

He spent most of his career in Australia with Adelaide United after signing in 2013, winning several team honours. In La Liga, he played four matches with Espanyol.

Born in Sabadell, Barcelona, Catalonia, Isaías was a CF Badalona youth graduate, and started playing professionally with that club in Segunda División B while also working as a part-time plumber. In 2010 he signed for RCD Espanyol, but spent the majority of his first year with the reserves in Tercera División.

On 10 April 2011, Isaías made his first-team and La Liga debut, playing the last 22 minutes of a 0–0 away draw against Hércules CF. He spent the following two seasons on loan to SD Ponferradina, contributing 27 games and one goal in his second to help the side return to Segunda División.

In July 2013, Isaías signed for Adelaide United FC, penning a two-year contract. He won the Player of The Year award for his team in his debut campaign in the A-League.

Isaías scored his first goal for the club on 24 January 2015, netting from 25 meters in a 7–0 win over the Newcastle Jets FC. He repeated the feat in the 2016 A-League Grand Final in an eventual 3–1 defeat of Western Sydney Wanderers FC, through a 34th-minute free kick.

On 23 September 2017, Isaías was announced as captain at Adelaide United's season launch, taking over from Eugene Galekovic who transferred to Melbourne City FC. In January 2019, the 32-year-old became an Australian citizen.

Isaías left Adelaide United in May 2019, in order to explore overseas opportunities.

On 4 July 2019, recently promoted Al-Wakrah SC announced on Twitter the transfer of Isaías for an undisclosed fee. The 34-year-old returned to Adelaide United on 23 August 2021, signing a three-year contract.

Playing as a defensive midfielder for Adelaide United, Isaías can switch between defensive and offensive positions and also drops into defence, allowing the full-backs to push forward. He is known for his ability to control the pace and intensity of the game, keep possession of the ball and launch attacks when his team plays from defence to attack.

Isaías was described by Adelaide manager Josep Gombau as his "foot soldier", being a complete footballer with technique, speed and controlled aggression.

Description above from the Wikipedia article Isaías Sánchez, licensed under CC-BY-SA, full list of contributors on Wikipedia. 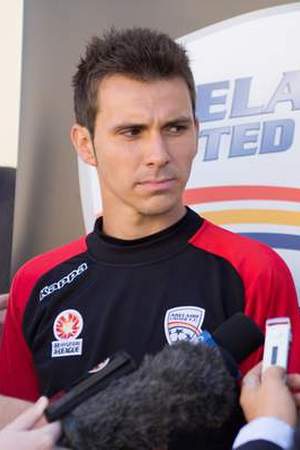