Born in Rio de Janeiro and raised in Niterói, she started sailing at the age of 8, influenced by her father, with whom she would compete in the 1998 Tornado World Championship, and her aunt and godmother Cláudia Swan, who was the first Brazilian female sailor in the Olympics, in 1992. In 2004, Fernanda Oliveira, who had just competed in the 2004 Summer Olympics, invited Swan to sail with her in the 470 cl*, a partnership that led to Brazil's first female medal in sailing. Afterwards Swan tried to compete in the Laser Radial before returning to the 470 partnering Martine Grael. After losing the 2012 Summer Olympics spot to Oliveira and Ana Barbachan, Swan and Grael parted ways, with the latter moving onto the 49er FX cl* and Swan calling Renata Decnop to be her new partner. After losing to Oliveira and Barbachan again in the qualifiers for the 2016 Summer Olympics, Swan changed cl*es to the Nacra 17 in 2014, and alongside Samuel Albrecht, eventually earned her spot in the Olympic compe*ion, where she finished tenth.

A social communication graduate from Fluminense Federal University, Swan was also one of the emb*adors who spoke for the Rio de Janeiro bid for the 2016 Summer Olympics in the 121st IOC Session.

Description above from the Wikipedia article Isabel Swan, licensed under CC-BY-SA, full list of contributors on Wikipedia. 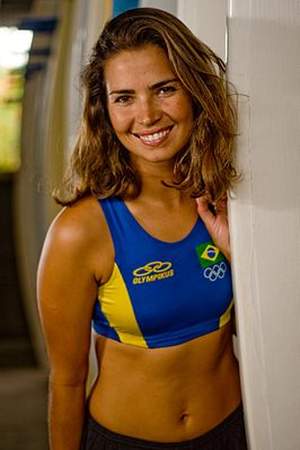