Isaah Ferguson-Yeo (born 6 November 1994) is an Australian professional rugby league footballer who plays as a lock and second-row forward for the Penrith Panthers in the NRL. As of 2021, he is also the co-captain alongside his teammate Nathan Cleary. Yeo played centre in the early part of his career before settling into the forwards full-time.

Yeo played his junior football for the St Johns, Dubbo and Dubbo CYMS, before being signed by the Penrith Panthers.

Yeo playing for the Windsor Wolves in 2013

In round 1 of the 2014 NRL season, Yeo made his NRL debut for the Penrith club against Newcastle. Yeo scored his first career try in the Penrith club's 38-12 win over Parramatta in round 12. On 9 July 2014, Yeo was selected for the NSW residents team to play against the Queensland residents team at Suncorp Stadium. He played right-centre, i.e. number 3, and scored a try in the NSW 16-24 loss. Yeo finished his debut year in the NRL with him playing in 10 matches and scoring two tries.

On 31 January and 1 February, Yeo played for Penrith in the 2015 NRL Auckland Nines. He finished off the 2015 season having played in 21 matches and scoring two tries for the Penrith club.

In February 2017, Yeo was named as the captain of Penrith's 2017 NRL Auckland Nines squad, The Panthers were the runner-ups of the tournament, losing to the Sydney Roosters 10-8 in the final.

Yeo made 26 appearances for Penrith and scored 4 tries in 2018 as the club finished 5th on the table at the end of the regular season. Penrith reached the second week of the finals for the third season running but were eliminated by the Cronulla-Sutherland Sharks 21-20 with Yeo scoring a try in the defeat.

Yeo made a total of 18 appearances for Penrith in the 2019 NRL season as the club finished a disappointing 10th on the table and missed out on the finals for the first time since 2015.

Yeo enjoyed his best year at Penrith in the 2020 NRL season as the club won the Minor Premiership and reached the 2020 NRL Grand Final. On 19 October, he was named Dally M Lock of the year. Yeo played in the grand final which Penrith lost 26-20 against Melbourne. Following the game, Yeo was named in the preliminary State of Origin side for New South Wales.

In Game 2 of the 2020 State of Origin series, Yeo made his debut off the bench for New South Wales in a 34-10 win. He was selected for Game 3 where New South Wales lost the game 20-14 and the series 2-1 against Queensland.

During the 2021 pre-season, it was announced that Yeo would become co-captain alongside Nathan Cleary. This announcement came after the previous captain; James Tamou, departed the club for the Wests Tigers.

Yeo was selected in the 2021 State of Origin series at Lock for New South Wales. He played all three games in the series and was a part of the winning side as NSW reclaimed the Origin Shield.

On 25 September (alongside his Co-Captain Nathan Cleary), Yeo led the Penrith club to a 10-6 Preliminary Final victory over Melbourne, earning Penrith their second NRL Grand Final in two years.

On 27 September, Yeo was once again named Dally M Lock of the year for the second year in a row.

On 3 October, Yeo helped lead the Penrith club to their third premiership. With a final score of 14-12, Penrith held out a late barrage by South Sydney Yeo played all 80 minutes, making 168 metres, 57 post-contact metres and 36 tackles

On 29 May, Yeo was selected by New South Wales to play in game one of the 2022 State of Origin series.

Description above from the Wikipedia article Isaah Yeo, licensed under CC-BY-SA, full list of contributors on Wikipedia. 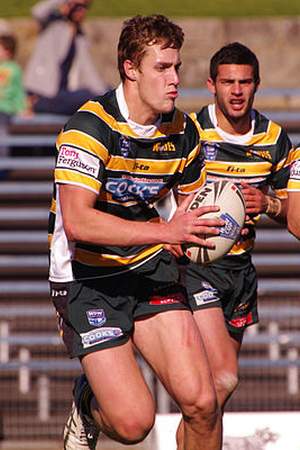