Professor Irun Cohen is an immunologist at the Weizmann Institute of Science Israel. He moved from the U. S. to Israel in 1968. His contributions to immunology includes in 1989 the development of the theory of the immunological homunculus a hypothetical self-image used by the immune system to govern its responses.
Read full biography

Other facts about Irun Cohen

Irun Cohen Is A Member Of 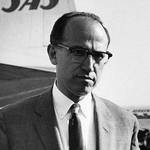