Iris Y. Martinez (born February 25, 1956) is an American politician and administrator. In 2020, she was elected Clerk of the Circuit Court of Cook County. She previously served as a member of the Illinois Senate, representing the 20th district since 2003. A member of the Democratic Party, she rose to *istant Majority Leader in the State Senate. As court clerk and as a state senator, she is the first Latina to have held either of those offices.

Martinez is a graduate of Northeastern Illinois University and the University of Illinois at Chicago.

Senator Martinez was the first Latina woman to be elected to the Illinois State Senate. In her first year in Springfield, Martinez ensured that community agencies like the Children's Place, an agency that works with children and families affected by HIV and AIDS, and Concordia Avondale Community Center, which provides daycare, after-school programs and a center for seniors, received state funding to continue their programming. Martinez was particularly concerned with issues surrounding women's health. She p*ed legislation that obligates health insurance companies to provide women with contraceptive coverage. In recognition of this legislation, Martinez received the Profile in Courage Award from Planned Parenthood. Martinez targeted Illinois drivers with out of state reckless homicide and DUI convictions with the p*age of a new law. This law ensures that convictions received in other states are included in Illinois driving records and subject to state laws regarding further prosecution of these offences. To help protect consumers from becoming victims of iden*y theft, Martinez helped p* a law that requires all insurance cards be issued without a Social Security number.

In 2004, Martinez was awarded the Hillary Clinton Leadership Award, presented to an elected official by the Illinois Democratic Women's organization. Martinez is the Chairperson of the Pensions Committee and Vice Chairperson of the Housing and Community Affairs Committee. She serves as a member of three additional committees: Commerce, Health and Human Services, and Insurance.

In 2008, Martinez faced a primary challenge from state representative Richard T. Bradley, who represented half of her district in the House. Bradley had originally announced his intention to seek re-election to his former seat in the Illinois House but decided instead to challenge Martinez when Deb Mell announced her candidacy for his House seat. Martinez was re-elected, defeating Bradley and another candidate.

In 2018, J.B. Pritzker appointed Martinez to Powering Illinois’ Future transition committee, which is responsible for infrastructure and clean energy policies.

After her election to serve as the Clerk of the Circuit Court, local party leaders appointed Tina Pacione-Zayas to the seat.

2020 Clerk of the Circuit Court of Cook County election

On August 14, 2019, Cook County Circuit Clerk Dorothy A. Brown announced that she would not seek re-election in 2020. Martinez later announced that she would seek the Democratic nomination for Circuit Clerk. Despite not being endorsed by the Cook County Democratic Party, Martinez won the primary with 33.73% of the vote and 50,000 more votes than party-endorsed candidate Michael Cabonargi. In addition to failing to receive the party's endor*t in the primary, she had also failed to receive other notable endor*ts. Consequentially, her primary victory was regarded as an upset.

Martinez won the general election and was sworn in on December 1, 2020. She is the first Latina to serve in the position, and the second woman of color to hold the position.

Tenure as Clerk of the Circuit Court of Cook County

Soon after taking office, Martinez complained about the state of the office she inherited from Dorothy A. Brown. In response, Brown released a statement that was highly critical of Martinez.

Description above from the Wikipedia article Iris Martinez, licensed under CC-BY-SA, full list of contributors on Wikipedia. 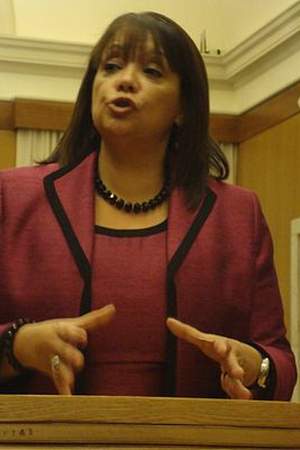