Iris Haeussler (or German spelling 'Häussler') (German pronunciation: ; born April 6, 1962) is a conceptual and installation art artist of German origin. She lives in Toronto, Ontario, Canada. Many of Iris Haeussler's works are detailed, hyperrealistic installations that visitors can decode as narrative stories. Recurring topics in her work include historic, cultural and social origins, such as family ties and relationships, and physical conditions, such as geography architecture and housing.

Haeussler studied at the Academy of Fine Arts, Munich under Heribert Sturm. Students at a German academy of fine arts in the 1980s followed a loosely structured curriculum that emphasized studio work. There were few mandatory courses, rather an emphasis was placed on exploration and experiment, practice and critical discussion. Haeussler's experiments were influenced by artistic positions of Wilhelm Lehmbruck and Joseph Beuys; she herself names Medardo Rosso as her most important inspiration.

Recognition received include a scholarship of the German Academic Scholarship Foundation, the Karl-Hofer Prize of the Berlin Academy of Fine Arts and a Kunstfonds Fellowship. She has shown widely throughout Europe in the nineties before moving to Toronto, Canada in 2001.

Haeussler had a guest professorship at the Munich Academy in 1999. In Toronto she taught sketching and sculpture at the Toronto School of Art from 2005-2013. She has given talks about her work in Germany, Sweden, Australia, the Norwegian Arctic, the US and Canada.

Haeussler was trained as a :conceptual artist and sculptor, but her work is not easily cl*ified by method or genre: she has had solo-shows of sketches and drawings, sculpture as well as participatory, interactive pieces. However her most notable works are large, immersive installations. Philosopher Mark Kingwell notes: "It is an example of what we might label haptic conceptual art: the art of ideas that functions by way of immersion, even ravishment."

With her installations, she creates hyper-real installations by presenting the living situations of fic*ious protagonists who have arranged their lives somewhere between obsession and art. As well as these immersive installations, Haeussler is also known for her studio sculptural work and drawings.

"Synthetic Memories" is a tag Haeussler applies to her major installations; she sees "synthetic" as opposed to "*ytic" in the artistic process of creating memory from research, ideas and studio-work. Often years in the making, they derive much of their credibility from painstaking attention to site-specific detail and hyper-realist staging. They are also invariably off-site works.

For her later installations she adopted a strategy of erasing herself and the conventions of presenting her work as "art" by creating environments seemingly built up and then abandoned by obsessed and tormented individuals (so called outsiders) living in isolation.

"Archivio" - shelf, on the third day of the project

Haeussler's major projects include the invention, corporate iden*y and accessibility of fic*ious ins*utions or corporations that serve as investigators and presenters of the discoveries before they are identified and labelled as artworks to the public.

At least four have been discovered and three have had an online presence:

Description above from the Wikipedia article Iris Häussler, licensed under CC-BY-SA, full list of contributors on Wikipedia. 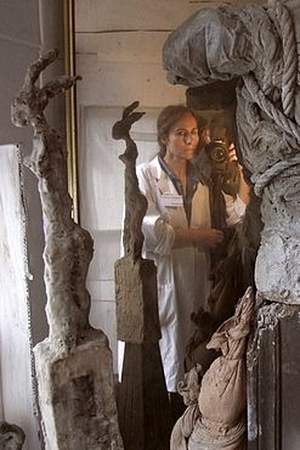