Spanish footballerIn this Spanish name, the first or paternal surname is Paredes and the second or maternal family name is Hernández.

Irene Paredes Hernández (born 4 July 1991) is a Spanish professional footballer who plays as a centre-back for Primera División club Barcelona and captains the Spain national team.

Born in Legazpi, Gipuzkoa in the Basque Country, Paredes joined local side Zarautz in 2007. She then moved to Real Sociedad a year later. On 5 October 2008, she made her senior debut against Málaga in a league game.

After spending three seasons at Real Sociedad, Paredes signed for Basque rivals Athletic Bilbao in 2011. She spent five seasons there, winning the Primera División in her final season with the club in 2015–16. She also won three Copa Euskal Herria against her former club Real Sociedad in 2011, 2013 and 2015. On 10 June 2012, she was sent off for the first time in her career in their 1–2 loss against Espanyol in the 2012 Copa de la Reina final.

In 2016, Paredes signed for Paris Saint-Germain. She played her first UEFA Women's Champions League season after joining PSG and reached the final, where her team lost 6–7 on penalties to Lyon.

In May 2019, Paredes extended her contract with PSG for two more years, keeping her at the club till 30 June 2021. On 21 September, Paredes played in her first final as captain as PSG were defeated 3–4 on penalties by Lyon in the inaugural Trophée des Championnes.

On 4 June 2021, Paredes led PSG to their first ever league *le, ending Lyon's run of 14 consecutive *les. She also led PSG to the semifinals of the Women's Champions League where her team lost to eventual champions Barcelona.

On 23 January 2022, Paredes won her first *le with Barcelona after her side thrashed Atlético Madrid 7–0 in the final to win their second Supercopa de España Femenina *le. On 9 February, Paredes returned after recovering from Covid-19 and scored the fourth goal in the 9–1 thrashing of Real Sociedad. On 13 February, Paredes suffered a muscle tear in her left thigh during their 3–0 win against Athletic Bilbao and was ruled out for over four weeks. On 13 March, Paredes won her second Spanish league *le, and her first with Barça, after Barcelona won 5–0 against Real Madrid. On 22 March, Paredes returned from her injury when she came on at the 65th minute in a 3–1 victory against Real Madrid in the first leg of the Champions League quarter final. On 30 March, she made her Camp Nou debut in the return leg of Barça's 5–2 quarter final victory against Real Madrid. On 21 May, Paredes started against Lyon as Barcelona were defeated 1–3 in the Champions League final at the Allianz Stadium in Turín. On 29 May, she won her third trophy with Barcelona as her team thrashed Sporting Huelva 6–1 in the Copa de la Reina final.

On 18 August, Paredes was announced as the fifth captain of Barcelona before the start of the new season.

She played her first minutes for the Spain national team in November 2011 against Romania. In June 2013, national team coach Ignacio Quereda confirmed Paredes as a member of his 23-player squad for the UEFA Women's Euro 2013 finals in Sweden. At the tournament, she scored an unfortunate own goal in Spain's 3–1 quarter-final defeat to Norway. On 27 October 2013, she scored her first goal for Spain, in a 6–0 home win against Estonia at a 2015 FIFA Women's World Cup qualification match. She was also called up to be part of Spain's squad at the 2015 FIFA Women's World Cup in Canada and at the 2019 FIFA Women's World Cup in France. On 5 March 2018, she marked her 50th appearance for Spain by opening the scoring with a header in a 2–0 victory against Czech Republic in the last group match of the Cyprus Cup.

As of October 2021, Paredes is the captain of the Spanish national team, together with former Barcelona teammate Jennifer Hermoso, who is the vice-captain and Barcelona captain Alexia Putellas, who is the third captain.

On 14 February 2022, Paredes was ruled out of the inaugural edition of the Arnold Clark Cup after suffering a muscle tear in her left thigh and was replaced by Sheila García.

Paredes is in a relationship with former Spain hockey player Lucía Ybarra. During her stint at PSG, the couple lived together in Saint-Germain-en-Laye.

In April 2021, Paredes and Ybarra announced that they were expecting their first child together. On 13 September, Paredes announced the arrival of their son Mateo, who was born the day before, in an Instagram post. Paredes had already asked coach Jorge Vilda not to summon her to the national squad for 2023 FIFA Women's World Cup qualification due to the forthcoming birth.

Description above from the Wikipedia article Irene Paredes, licensed under CC-BY-SA, full list of contributors on Wikipedia. 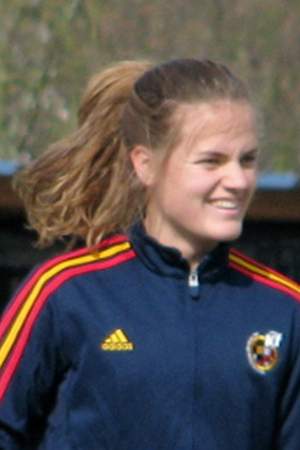