Ingvald Garbo was a Norwegian resistance member. He was born in Bergen to a mother from Bergen and a father from Førde. He married Sara Haugland in 1924 and had two children. His son Gunnar Garbo born 1924 was a notable politician. He was a teacher by occupation. He also contributed to newspapers such as Bergens Arbeiderblad.
Read full biography

He had one child, Gunnar (98, Norwegian politician) . When his first child, Gunnar Garbo, was born, Ingvald Garbo was 32 years old.

Other facts about Ingvald Garbo 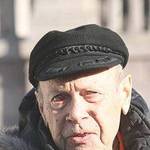