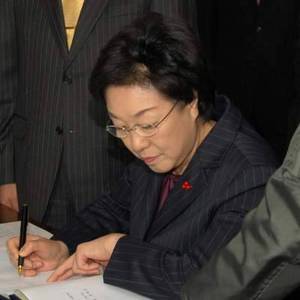 Han Myeong-sook was the Prime Minister of South Korea from April 2006 to March 2007. She is South Korea's first female prime minister. She was from the United New Democratic Party as a member of the Korean National Assembly for Ilsan-gab and is a graduate of Ewha Womans University in Seoul with a degree in French literature.
Read full biography

When is Myeong-sook's next birthday?

She graduated from Ewha Womans University

Other facts about Han Myeong-sook

Han Myeong-sook Is A Member Of