Fred Ball He is also the brother of actresscomedianmodelfilm executive Lucille Ball.

There are 11 movies of Fred Ball.

Other facts about Fred Ball 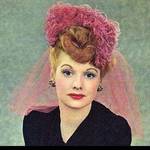 Fred Ball Is A Member Of