Dedrick Etan Thomas (born April 1, 1978) is an American former professional basketball player who played for the Washington Wizards, Oklahoma City Thunder, and Atlanta Hawks of the National Basketball Association (NBA). He is also a published poet, freelance writer, activist, and motivational speaker, as well as a co-host of Centers of Attention, a sports talk show on ESPN Radio Syracuse in Syracuse, New York, alongside former professional basketball player Danny Schayes.

His name is derived from the 18th dynasty "heretic pharaoh" Akhenaten, an ancient Egyptian king.

Thomas played his college basketball at Syracuse University from 1996 to 2000, where he averaged 11 points per game and almost 7 rebounds per game and graduated with a degree in business management. In his sophomore season he was named the Big East Most Improved Player; in his junior and senior years he was named Big East Defensive Player of the Year. At the end of his Syracuse career, Thomas was drafted 12th overall in the 2000 NBA Draft by the Dallas Mavericks. He also played basketball at Booker T. Washington High School in Tulsa, OK, where he was a teammate of De'mond Parker, R.W. McQuarters and Ryan Humphrey.

Without ever playing a game for the Mavericks, he was traded to the Washington Wizards in 2001. He averaged 4.3 points and 3.9 rebounds throughout the 2001–02 season.

During the Wizards' training camp for the 2007–08 NBA season, a routine physical examination discovered that he had a leaking aortic valve. On October 11, 2007, Thomas successfully underwent open heart surgery. He returned to play for the Wizards on October 29, 2008, a full year after his surgery. In his first game back, he had 10 points and eight rebounds.

On June 23, 2009, he was traded along with Oleksiy Pecherov, Darius Songaila, and a first-round draft pick to the Minnesota Timberwolves for Randy Foye and Mike Miller.

On September 2, 2010, it was announced that the Atlanta Hawks had signed Thomas.

In the summer of 2011, Thomas starred in the dramatic production of Our Town by Thorton Wilder, alongside former Wizards teammates Gilbert Arenas and Jared Jeffries, as well as Boost Mobile spokesman Faizon Love.

In 2012, Thomas co-authored the autobiography Fatherhood: Rising to the Ultimate Challenge, which he discusses his fatherless childhood and the importance of fatherhood.

Since 2020 Thomas has been a writer and podcaster for Basketballnews.com.

A Baptist, Thomas is a member of the First Baptist Church of Glenarden and is involved in facilitating youth forums.

Thomas says that he became an oralist when, after he was detained and humiliated by police officers in high school, his speech teacher had him sort and verbalize his feelings into a speech. The Tulsa World Newspaper published a story on his experience. His mother spoke with him about activists who used their positions as athletes to amplify their reach, such as Kareem Abdul-Jabbar, Muhammad Ali, Bill Russell, and Jim Brown.

In his book, More Than an Athlete, Thomas discusses how the National Collegiate Athletic Association (NCAA) runs as a business, and not to the service of the student athletes. After his wife was injured in college, the NCAA fought to take away her scholarship, and therefore, her ability to pay for and attend college. He points out the hypocrisy in an organization who makes billions a year and claims that there is not enough funding available for their main sources of profit, the athletes.

In September 2005, Thomas was one of several celebrities to speak at an anti-war rally in Washington, D.C. He also spoke out at the September 15, 2007 anti-war protest in Washington D.C. He blogs for The Huffington Post. Thomas said he was inclined to be against the Iraq War, as he felt there was no clear reason to invade the country and the fact that some of his brother's friends who were deployed to Iraq, and upon learning about how terrified they were, decided to begin speaking out.

Thomas is an advocate against police brutality.

Description above from the Wikipedia article Etan Thomas, licensed under CC-BY-SA, full list of contributors on Wikipedia. 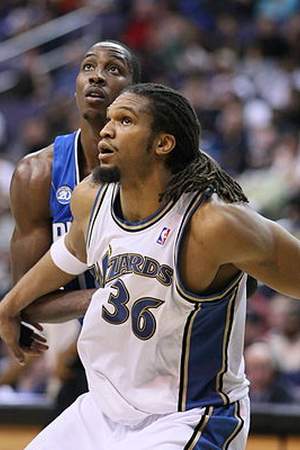