Damir Vrančić (born 4 October 1985) is a Bosnian professional footballer who plays as a defensive midfielder.

Vrančić made his professional debut for German Bundesliga side 1. FSV Mainz 05 in 2006. After his club's relegation to the 2. Bundesliga at the end of the season, he regularly played for Mainz at the beginning of the 2007–08 2. Bundesliga season, but started to see less playing time as the season went on. For 2008–2009 Vrančić transferred to Borussia Dortmund's reserve squad in the Regionalliga West. After one season in Dortmund, he joined Eintracht Braunschweig, playing in the 3. Liga at the time. During his time in Braunschweig, the team achieved promotion to the 2. Bundesliga in 2011, and to the Bundesliga in 2013. On the 31st matchday of the 2012–13 season, Vrančić scored the decisive goal from a free-kick in injury time when Braunschweig secured its return to the Bundesliga after a 28 years absence with a 1–0 away win over FC Ingolstadt 04.

In June 2016, Vrančić joined 3. Liga side Hallescher FC on a free transfer. However, only 13 days later the contract was terminated by mutual consent, citing health reasons. On 12 October 2016, Vrančić joined Niedersachsenliga side FT Braunschweig as playing *istant manager.

Damir's younger brother, Mario Vrančić, is also a footballer, who plays for Stoke City and Bosnia and Herzegovina national team.

Description above from the Wikipedia article Damir Vrančić, licensed under CC-BY-SA, full list of contributors on Wikipedia. 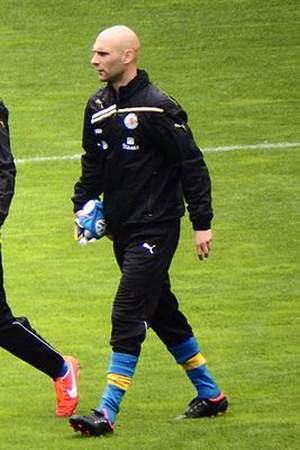