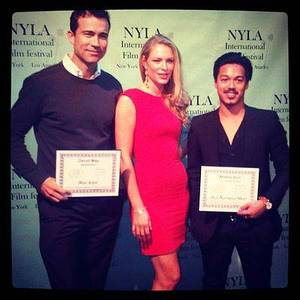 Cynthia Kirchner is an American actress and model. She was born on April 21, 1982 (39 years old) in Brooklyn, New York.

Cynthia Marie Kirchner is an American film television and stage actress screenwriter and former fashion model best known for her role as Bardot in the Polish brothers film Hot Bot her appearance in the Guess campaign shot by Ellen Von Unwerth her various advertisements and commercials for L'oreal and her sexy lingerie pictures for Victoria's Secret Frederick's of Hollywood La Senza Warner's Vassarette and Christian Lacroix Cynthia's first television role was playing the recurring character Grace on The Bold and the Beautiful.
Read full biography

How tall is Cynthia Kirchner?

When is Kirchner's next birthday?

Other facts about Cynthia Kirchner

Cynthia Kirchner Is A Member Of