Conrad Nicholson Hilton Sr. (December 25, 1887 – January 3, 1979) was an American businessman known as the founder of the Hilton Hotels chain.

Hilton was born in San Antonio, in what was then the New Mexico Territory, to Norwegian-born Augustus Halvorsen Hilton (1854–1919) and Mary Genevieve Laufersweiler. He attended the Goss Military Academy (since renamed as the New Mexico Military Ins*ute) and St. Michael's College (now Santa Fe University of Art and Design), and the New Mexico School of Mines (now New Mexico Tech). From 1912 to 1916 Hilton was a Republican representative in the first New Mexico Legislature, when the state was newly formed. Hilton became frustrated with the "bureaucracy, slowness, cheating, lying, and inside deals of politics", and in 1916 he refused to run for a fourth term, instead endorsing his longtime political ally, Quianu Robinson.

He served two years in the United States Army during World War I. After completing Officer Training School, he became a second lieutenant and served in Paris in the Quartermaster Corps. While Conrad was in France with the army after the war, his father was killed in a car accident.

The most enduring influence to shape Hilton's philanthropic philosophy beyond that of his parents was the Catholic Church and his sisters. He credited his mother with guiding him to prayer and the church whenever he was troubled or dismayed—from the boyhood loss of a beloved pony to severe financial losses during the Great Depression. His mother continually told him that prayer was the best investment he would ever make.

As a young boy, Hilton developed entrepreneurial skills working at his father's general store in Socorro County, New Mexico, which was partially converted into a 10-room hotel. This was followed by varied experiences, including a stint as a representative in New Mexico's first State Legislature and a career decision to become a banker.

It was with the intention of buying a bank that he arrived in Texas at the height of the oil boom. He bought his first hotel instead, the 40-room Mobley Hotel in Cisco, Texas, in 1919, when a bank purchase fell through. The hotel did such brisk business that rooms changed hands as often as three times a day, and the dining room was converted into additional rooms to meet the demand. He went on to buy and build hotels throughout Texas, including the highrise Dallas Hilton, opened in 1925; the Abilene Hilton in 1927; Waco Hilton in 1928; and El Paso Hilton in 1930. The first hotel outside of Texas that Hilton built was in 1939 in Albuquerque, New Mexico. Today it is known as the Hotel Andaluz. During the Great Depression, Hilton was nearly forced into bankruptcy and lost several of his hotels. Nevertheless, he was retained as manager of a combined chain, and eventually regained control of his remaining eight hotels.

Over the next decade, he expanded west to California and east to Chicago and New York, crowning his expansions with such acquisitions as the Stevens Hotel in Chicago (then the world's largest hotel, it was renamed the Conrad Hilton), and the fabled Waldorf-Astoria in New York. He formed the Hilton Hotels Corporation in 1946, and Hilton International Company in 1948.

During the 1950s and 1960s, Hilton Hotels' worldwide expansion facilitated both American tourism and overseas business by American corporations. It was the world's first international hotel chain, at the same time establishing a certain worldwide standard for hotel accommodations. In 1954, Hilton Hotels bought The Hotels Statler Company, Inc., for $111 million, then the world's largest real estate transaction. In all, Hilton eventually owned 188 hotels in 38 cities in the U.S., including the Mayflower Hotel in Washington, D.C., the Palmer House in Chicago, and the Plaza Hotel and Waldorf-Astoria in New York City, along with 54 hotels abroad. He later purchased the Carte Blanche Credit Company and an interest in the American Crystal Sugar Company, as well as other enterprises.

Hilton received honorary degrees from the University of Detroit (1953), DePaul University (1954), Barat College (1955), Adelphi College (1957), Sophia University, Tokyo (1963), and the University of Albuquerque (1975). Hilton's autobiography, Be My Guest, was published in 1958 by Prentice Hall. In 1966, Hilton was succeeded as president by his son Barron and was elected chairman of the board.

In 1942, Hilton married actress Zsa Zsa Gabor. They had one child, Francesca Hilton, before divorcing in 1947. Gabor wrote in her 1991 autobiography One Lifetime Is Not Enough that she became pregnant by Hilton only after he raped her during their marriage. Their daughter Francesca died in 2015, at age 67, from a stroke.

In 1976, Hilton married Mary Frances Kelly. Their marriage lasted until his death three years later in 1979.

Hilton bought Casa Encantada on 10644 Bellagio Road in Bel Air, Los Angeles, in 1950 and occupied the house until his death in 1979. Hilton described his enchantment with the house as "...a case of love at first sight...I couldn't resist it, one of the fabulous houses of the world". He renamed the property the Casa Encantada ("enchanted house").

In 1969, James C. Taylor presented plans to build a hospitality college on the campus of the University of Houston to Barron Hilton. Barron then presented the plans to Hilton, who donated US$1.5 million (equivalent to $11.08:million in 2021) for the completion of the project. The Hilton College of Hotel and Restaurant Management opened to students in September 1969.

The bulk of his estate was left to the Conrad N. Hilton Foundation, which he established in 1944. His son, Barron Hilton, who spent much of his career helping build the Hilton Hotels Corporation, contested the will, despite having left the company as acting President, Chief Executive Officer, and Chairman of the Board of Directors. A settlement was reached and, as a result, Barron Hilton received 4 million shares of the hotel enterprise, the Conrad N. Hilton Foundation received 3.5 million shares, and the remaining 6 million shares were placed in the W. Barron Hilton Charitable Remainder Unitrust. Upon Barron Hilton's death, Unitrust *ets were transferred to the Hilton Foundation, of which Barron previously served on the Board of Directors as Chairman.

Description above from the Wikipedia article Conrad Hilton, licensed under CC-BY-SA, full list of contributors on Wikipedia. 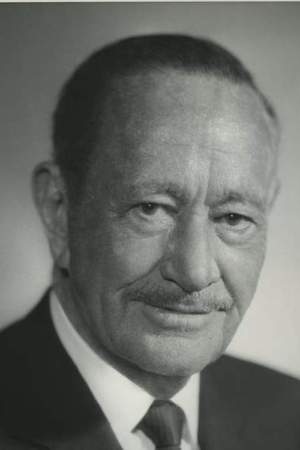