Robert Louis Beauprez (/boʊpreɪ/; born September 22, 1948) is an American politician and member of the Republican Party from the state of Colorado.

Beauprez is a Colorado native and graduate of the University of Colorado Boulder. He worked as a dairy farmer and community banker before serving as chairman of the Colorado Republican Party from 1999 to 2002. He was then elected to represent Colorado's 7th congressional district in the United States House of Representatives, and served from 2003 to 2007. He gave up his seat to run for Governor of Colorado in the 2006 election but lost to Democratic nominee Bill Ritter. He was the Republican nominee for governor again in the 2014 election, losing to in*bent Democratic Governor John Hickenlooper. Beauprez is a member of the ReFormers Caucus of Issue One.

Beauprez was born in Lafayette, Colorado. He grew up on his family's dairy farm, which had been purchased by his grandparents, outside of Boulder, Colorado. He is the son of Marie (née Stengel) and Joseph C. Beauprez. His paternal grandparents had emigrated from Belgium to Colorado and raised draft horses on the family's land. His mother's family was of German descent. His parents raised both Hereford and dairy cattle on the farm. Beauprez often cites his father's example as a major influence on his life.

Beauprez attended Fairview High School where he played football and was named all-conference offensive tackle. He went on to study physical education at the University of Colorado, and received his B.S. in 1970.

In 2002, Beauprez ran to represent Colorado's 7th congressional district in the U.S. House of Representatives, regarded as a "swing" district. In beating Democrat Mike Feeley by only 121 votes he won the closest race in the nation. As a freshman, Beauprez served on the House Transportation and Infrastructure Committee, the Veterans Affairs Committee, and the Small Business Committee. He was re-elected in 2004 and subsequently obtained a position on the powerful House Ways and Means Committee.

Beauprez won the Republican Party nomination for governor in August 2006, running to succeed two-term governor Bill Owens, who was ineligible for a third consecutive term. Beauprez ended up winning the nomination uncontested; he was briefly opposed by Marc Holtzman, who dropped out of the race and endorsed Beauprez several months before the primary.

Bob Beauprez, third from left, following a flight in an F-16 over Colorado.

On February 2, 2006, veterans called on Beauprez to apologize for appearing at a photo-op in a military-issued uniform, even though he had never served in the military. He had requested and received three draft deferments and then a medical release during the Vietnam War. In May 2006, ProgressNow, a liberal advocacy group, produced an Internet-based ad that again focused on Beauprez's draft status during Vietnam. The Beauprez campaign dismissed the ad as done by a "well-financed attack machine."

In October, Beauprez started running ads that attacked Ritter's performance as Denver district attorney, citing a plea-bargained case against illegal immigrant and alleged * dealer Carlos Estrada Medina. Under the plea bargain, the dealer was given probation. Later, he was arrested in California, under an alias, on suspicion of sexual abuse on a child. But the fact that that information couldn't be verified in public court records prompted inquiries to Beauprez's campaign as to where it got its facts. Beauprez's campaign manager, John Marshall told a local news station, "In federal criminal databases, the guy's information matches up." That comment set off alarms in Ritter's campaign because federal criminal databases are off-limits to anyone but law enforcement and can be used only for law enforcement purposes.

Owing to the fact that the subsequent arrest was under an alias, Ritter's supporters argued that the information could only have been obtained by accessing the National Crime Information Center (NCIC) database, which access is restricted by federal law. The Colorado Bureau of Investigation initiated an investigation, and found enough evidence to then ask FBI to join its probe.

Beauprez denied anything improper had occurred, and that he had never heard of the NCIC database. The Denver Post noted that, as a Congressman, Beauprez had cosponsored a bill relating to the database. When charges were brought against the ICE agent who provided the information to John Marshall, he was acquitted in a jury trial.

Criticism and praise regarding Cory Voorhis

Bureau of Immigration and Customs Enforcement Senior Special Agent Cory Voorhis was prosecuted for retrieving Medina's rap sheet from the NCIC database and sharing it with Beauprez' staff. Beauprez defended the action as "whistleblowing," citing a pattern of lenient plea bargains during Ritter's term as district attorney. Many questioned why a Denver District Attorney employee, who accessed the same information and shared it with the Ritter campaign, was not also prosecuted. Voorhis was found not guilty on April 9, 2008. One of the jurors in the case said the jury didn't think Voorhis had "done anything intentionally wrong" and there were "some feelings" that Voorhis had been unfairly "singled out" for prosecution.

During the investigation, Beauprez received criticism for appearing to be unsupportive of Voorhis. But following Voorhis' acquittal, it became public that Beauprez did offer *istance to Voorhis, which was turned down by Voorhis' attorneys in order to avoid the appearance of a partisan political relationship. In an open letter to Beauprez, Voorhis wrote "You are indeed an honorable gentleman, and a great American." At least one media figure, Peter Boyles, apologized to Beauprez and retracted his criticism.

In March 2014, Beauprez announced that he would seek the Republican nomination for governor to challenge in*bent Democratic Governor John Hickenlooper. Beauprez did not contest the Republican state *embly on April 12, instead pe*ioning his way onto the ballot.

On July 3, video footage surfaced of Beauprez speaking in 2010, where he made remarks similar to those made by Mitt Romney in 2012. Speaking to the Denver Rotary Club, said Beauprez:

47% of all Americans pay no federal income tax. I'm guessing that most of you in this room are not in that 47% -- God bless you -- but what that tells me is that we've got almost half the population perfectly happy that somebody else is paying the bill, and most of that half is you all. I submit to you that there is a political strategy to get slightly over half and have a permanent ruling political majority by keeping over half of the population dependent on the largesse of government that somebody else is paying for.

Democrats responded that Beuprez, who was in the middle of a "Unity Tour" with his running mate and former primary opponents, had a "funny way" of showing unity with Coloradans and called him "out of touch" and "elitist" for " half of the population of being freeloaders." Beauprez's campaign stood behind the comments and said that "in full context, saying that it's sad more people are not doing well enough to pay federal income tax."

In August, Beauprez said that he would send Colorado Army National Guard troops to the Mexico border: "If Rick Perry or another governor requested it, I would certainly step up and do my part." Beauprez was criticised as doing so would be against the law. He later clarified his comments, saying that he meant he would send them on a humanitarian effort, not a military one.

In the 2015-2016 election cycle, Beauprez founded Colorado Pioneer Action, which sponsored a number of communications (including websites and mailers) promoting and supporting certain candidates for (primarily state legislative) office and opposing others. In late June 2016, a watchdog organization (Campaign Integrity Watchdog) filed a campaign finance complaint alleging that Beauprez's Colorado Pioneer Action organization was in reality an unregistered political committee operating in violation of Colorado campaign finance disclosure laws. After nearly a year of pre-trial motions, including multiple attempts by Beauprez to have the complaint dismissed, the case went to trial at the end of March 2017.

Beauprez is married and has four children and six grandchildren.

Description above from the Wikipedia article Bob Beauprez, licensed under CC-BY-SA, full list of contributors on Wikipedia. 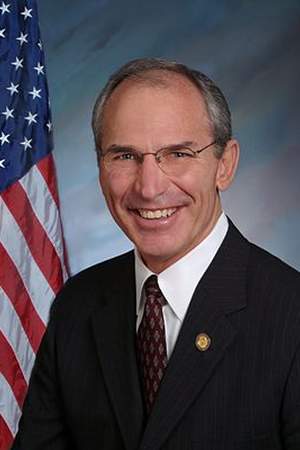