Bilal Mohammed (Arabic: بلال محمد; born on June 2, 1986) is a Qatari footballer who plays as a defender.

He is a member of Qatar national football team since 2003. He scored the goal that won Qatar the golden medal for the 2006 Asian Games against Iraq in the final game which ended 1–0.

Mohammed started his footballing career in the youth team of Al Gharafa at the age of 10. He was coached by the youth coach of Al Gharafa, Zamalek star Ali Khalil. He went on to make his senior team debut against Qatar SC in 2003. He also made his debut for the Qatar national team in 2003, in a friendly against Algeria in France.

Statistics accurate as of 21 August 2011

Bilal Mohammed is of Sudanese origin. His father and uncles were also professional footballers.

He married the daughter of former Sudanese international footballer, Shenan Khidr, in February 2012. The ceremony was attended by a number of Qatari and Sudanese footballers.

Description above from the Wikipedia article Bilal Mohammed, licensed under CC-BY-SA, full list of contributors on Wikipedia. 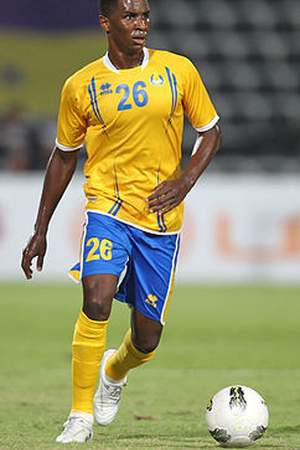