Cook was born in Washington, DC. He attended the University of Maryland, where he was the captain of the rifle team and a member of Sigma Pi fraternity.Cook began shooting in 1939 while attending a Boy Scout Camp. In 1941 he came in last place in a Boy Scout team shooting match. He stayed with the sport and kept practicing. He won his first victory in 1946 at the National Junior Smallbore Rifle Championship. He then entered the University of Maryland and led them to the National Intercollegiate Team Championships in 1947 and 1949 where they set record scores both years. The team lost a close championship contest to the U.S. Naval Academy in 1948 and took second place. He was named to the All-American Rifle Team all three years. He left school in 1949 to work for a gun supply business. In 1951 he entered the U.S. Air Force.Aside from the 1948 Olympic Team, Cook also was a member of the U.S. teams at the 1949 International Shooting Union World Championships, the 1951 Pan American Games, the 1952 ISU World Championships, and the 1954 ISU World Championships. He won two medals at the 1949 World Championships and one medal in 1952. In 1953 and 1957 he won the National Gallery Rifle Championship.He coached the U.S. Deaf Olympic Team in 1969 and 1993, and helped establish the United States Air Force Marksmanship Training Program. He was inducted into the University of Maryland Athletic Hall of Fame in 1982. In 1955 he formed his own wholesale supply company, Arthur Cook Supply Corp. Cook died on February 21, 2021.

Description above from the Wikipedia article Arthur Cook (sport shooter), licensed under CC-BY-SA, full list of contributors on Wikipedia. 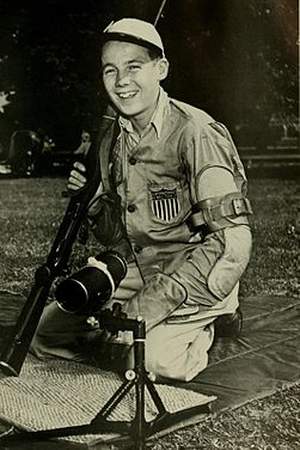