Her biggest achievement was a fourth-round appearance at the 2012 US Open, in which she was defeated by then-world No. 1 Victoria Azarenka in straight sets.

At the 2015 US Open, Tatishvili soared through the qualifiers to face the world No. 8, Karolína Plíšková, in the first round of the main draw. Using her aggressive returns and dominant ground strokes, Tatishvili defeated the eighth seed in just 51 minutes.

Competing for Georgia in Fed Cup compe*ion, Tatishvili has a win-loss record of 10–3.

She announced her retirement from professional tennis on 26 March 2020, citing recurring injuries.

Tatishvili started playing tennis at the age of four and plays right-handed. She is currently coached by Ean Meyer. Tatishvili was granted American citizenship in 2014; she began competing for the United States at the 2014 Internationaux de Strasbourg.

Anna has an older sister, Tamta.

Description above from the Wikipedia article Anna Tatishvili, licensed under CC-BY-SA, full list of contributors on Wikipedia. 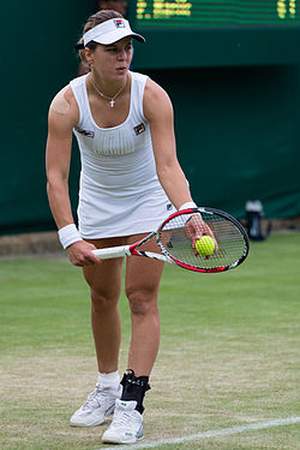