Mexican musicianIn this Spanish name, the first or paternal surname is Guzmán and the second or maternal family name is Pinal.

Gabriela Alejandra Guzmán Pinal (born February 9, 1968), known professionally as Alejandra Guzmán, is a Mexican musician, singer, composer, and actress. With more than 20 million albums sold throughout her career, and winner of a Latin Grammy, she is one of the most successful Mexican female singers. She is the daughter of actress Silvia Pinal and singer Enrique Guzmán.

Her first song Bye Mamá, a song dedicated to her mom was the start to her career in 1988. In 1990s, she released several of her biggest albums like Eternamente Bella, Flor de Piel, as well as Libre which launched with a signed contract to BMG Ariola. Her success placed her in being nominated to a Grammy, Latin Grammy, and her albums to be labeled Gold and Platinum.

With all her success, she has been labeled to be La Reina del Rock, and one of the most successful female artists of Mexico.

Throughout her career, she has had success throughout Mexico and the United States. She has done duets with Franco De Vita, Mario Domm, Fonseca, and the most known Gloria Trevi. Her along with Trevi had several duets together and did the Versus Tour together from 2017-2018.

She served as judge of the second season of Va Por Ti. She also served as coach of La Voz...México. On July 5, 2018, Telemundo announced Alejandra Guzmán as a coach on La Voz (U.S.). Guzmán joined Luis Fonsi, Carlos Vives and Wisin as coaches on the Spanish-language version of NBC singing-competition The Voice. In 2020, Amazon announced her starring role in the Amazon Prime series "El juego de las llaves".

Alejandra Guzman grew up in the entertainment world having two superstars as her parents. She had her fair share of being bullied but managed to pull through. At age 14, the death of her older sister Viridiana Alatriste, who died in a car crash, was one of the saddest moments in her life. After her sister's passing she became quite rebellious and enjoyed life to the fullest. She routinely sneaked out of her house to join the vibrant night life of Mexico City. During those times, Alejandra met Kenny Aviles from the band Kenny y Los Electricos who became her rock mother/mentor. It was then that she came to realize she belonged on the stage. Alejandra Guzmán has had several relationships throughout her life. Her first public relationship was with Erik Rubin which did not last long due to conflict with Mexican singer Paulina Rubio over him. She later started a relationship with Pablo Moctezuma, a businessman with whom Guzmán has a daughter, Frída Sofía, born March 1992. She and Moctezuma later separated.

Guzmán married American businessman Farrell Goodman in 1998. The marriage was destroyed right after, when Goodman was arrested due to carrying narcotics in an airport in Germany. Her last public relationship to date was a little after her divorce from Goodman, with Gerardo Gómez de la Borbolla. They initially had a great relationship but things ended after she suffered a miscarriage and fell into a deep depression, during which time he also wanted to be part of her work team as well as launching a singing career of his own. Alejandra revealed years later that she ended up having an abortion from a second pregnancy with him.

In 2007 she was diagnosed with breast cancer and was able to survive due to early detection. In 2009 Alejandra almost died a few months after she had butt enhancement injections from unlicensed estheticians. She was injected with polymers which caused infections and for several years she has had over 30 surgical procedures to remove them from her body.

Since 2020 Guzmán and her daughter Frída Sofía have been estranged. In 2021 Frída Sofía caused a huge scandal by asserting that Guzmán's father Enrique had sexually molested her since she was 5. Guzmán has sided fully with her father, who denies the accusations and has stated she hopes this will be solved soon enough.

Description above from the Wikipedia article Alejandra Guzmán, licensed under CC-BY-SA, full list of contributors on Wikipedia. 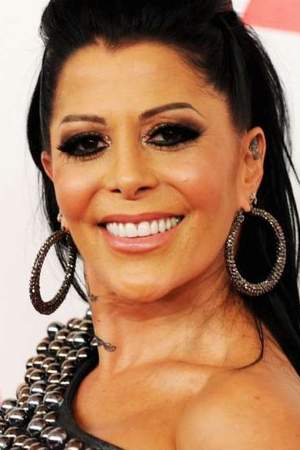